Home News Cannot Get News from 2 Reporters Who Want to Show Wuhan’s Real... 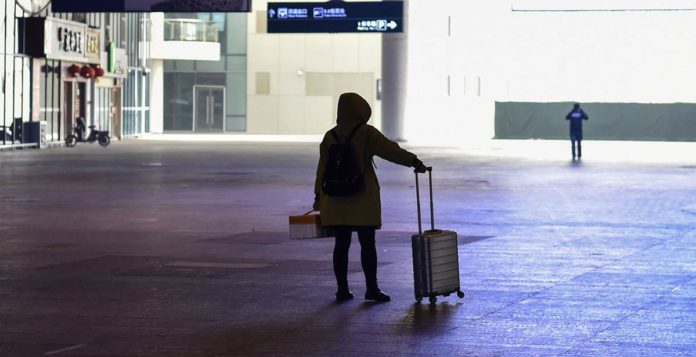 For a long time, no news can be heard from 2 Wuhan citizens, who are under quarantine and want to tell the rest of the world with all the truth about what is happening in Wuhan, China, the main center of the COVID-19 virus.

COVID-19, a variety of Corona Virus that appeared in late 2019, spread rapidly and caused deaths, causing great fears among people. To prevent the spread of the virus, the central city Wuhan was quarantined, and security measures were increased at all international airports worldwide. Unfortunately, the virus could not be prevented from going outside China.

People who want to share the effects of the virus to the ghost city under quarantine with the world share the photos of the city in the internet world via social media with the photos they took from their drones. Besides being among these people, two reporter Fang Bin and Chen Qiushi who live in Wuhan have not been heard for days.

They posted videos, shared photos, and announced true drama stories from the quarantined city in the rest of the country. By sharing the news they got from Wuhan, the capital of Hubei province, they did their best to explain the seriousness of the virus crisis. After that, no information is available from reporter Fang Bin since February 9, and from reporter Chen Qiushi since February 7.

Fang Bin:
Fang Bin, a businessman living in Wuhan, made his video postings on his social media account saying “he will best report the facts in his position”. Because of YouTube banned in China, Fang Bin uploaded his first video to YouTube on January 25, using VPN services, and then shared several videos he shot while traveling around the city on YouTube channel and gained over 1,000 views.

The video shared by Fang Bin on February 1 has reached 200,000 views due to its content. In the video, Fang Bin, who filmed a hospital, showed that 8 bodies were removed from the hospital and that these bodies were placed in a van.

Fang Bin, who was raided by the police on the night he uploaded the video, was taken to the police station for interrogation, but was later released. Fang Bin, who shared a 13-second video on February 9, used the words: “Everyone uprising – give the power of the government back to the public”. There was no news of Fang Bin after the video was shared.

Chen Qiushi:
Chen Qiushi, a former human rights lawyer and known among activists, became a video reporter when the COVID-19 virus broke out and became viral. Standing out in the Hong Kong protests last August, Qiushi spread his name to a wider audience.

This behavior later caused Qiushi to be constantly harassed and harassed by Chinese officials. It has been deleted, including social media accounts with over 700,000 followers, but it was not silent.

In October, Qiushi opened a YouTube channel that currently has over 400,000 followers. Towards the end of January, she decided to go to Wuhan so she could report the worsening situation to the world. In the first YouTube video: “I will use my camera to show what’s really happening. I promise I will not cover the facts.” used expressions.

He visited multiple hospitals in Wuhan and held interviews with patients. Chen Qiushi, who was aware that he was taking a big risk in doing these, told BBC reporter John Sudworth that he did not know how long he could go, and said, “Censorship rules are very strict. Their accounts are closed when others share my content.” He added.

The video shared on Qiushi’s Twitter account by her mother on February 7 stated that the brave reporter Chen Qiushi was involved in the losses the day before. Her friend Xu Xiaodong stated that Qiushi was forcibly kept under quarantine in the YouTube video he shared later.

What did the government officials say about the issue?
The officials, who did not make any explanation as to where Fang Bin and Chen Qiushi were, did not provide information on when the reporters would be released. Investigator Patrick Poon said he did not know if reporters were taken away by the police or if they were forced into detention.

It is stated by the Chinese Government, which has a bad past with the people who have taken honest talks about the officials in the public, that the reporters’ family is not given any information and no right to hire a lawyer.

Cyberpunk 2077: where are all the tarot cards of Misty