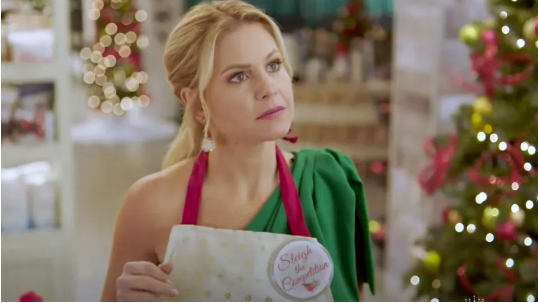 Hallmark star Candice Cameron Bure has been criticized for her recent comments regarding one of the reasons she left the Hallmark Channel to become the chief creative officer of Great American Family. During a conversation with the Wall Street Journal, she spoke about the decision not to publish LGBTQ+ stories on her network and instead focus on “traditional marriage.” After the comments caused a negative reaction from the public, including Jojo Siva and other celebrities, Bure responds.

The actress took to her Instagram story on Wednesday afternoon to respond to the negative public reaction. That’s what she said:

I would like to address my comments on The Great American Family programs published in The Wall Street Journal. All of you who know me know without a doubt that I have great love and affection for all people. It absolutely breaks my heart that anyone would ever think that I intentionally want to offend and hurt someone. It saddens me that the media often try to divide us, even around such a comforting and fun subject as Christmas movies. But given the toxic climate in our culture right now, I shouldn’t be surprised. We need Christmas more than ever. I am a devoted Christian. This means that I believe that every person bears the image of God. Therefore, I am called to love all people, and I do it. If you know me, then you know that I am a person who loves violently and indiscriminately. My heart yearns to build bridges and bring people one step closer to God, to love others and just be a reflection of God’s great love for all of us.

Since the WSJ article was published a couple of days ago, it attracted the attention of many who did not like her comments, including Jojo Siwa, who is part of the LGBTQ+ community and criticized the actress for being “rude and offensive to the whole world.” community of people”. Former Hallmark star Hilary Burton called Bure a “fanatic” and told her she could “ride this wave of prejudice” to the bank. Bure ‘s comments continue as follows:

Candice Cameron Bure, who has starred in ten holiday films with Hallmark for thirteen years, shocked fans earlier this year by announcing that she was leaving the network for Great American Family. Bure ‘s comments on the recent controversy subsequently included the following:

I’ve been wanting to find a home for more religious programming for a long time. I am grateful to be an integral part of a young and growing network. I also said in my interview, which was not included, that people of all nationalities and identities make and will continue to make a great contribution to the network both in front of the camera and beyond, which I encourage and fully support. I have never been interested in proselytizing through storytelling, but in glorifying God’s greatness in our lives through the stories I tell.

Mortal Kombat: Shaolin Monks And Other Different Games In The Franchise