Home Entertainment Can you cancel sending iMessage in iOS 15? 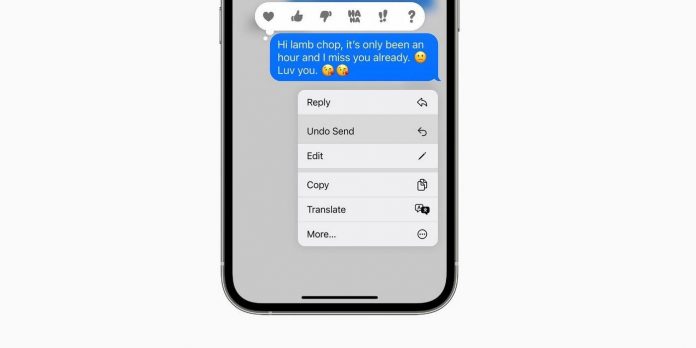 At its annual Worldwide Developers Conference (WWDC) on June 6, Apple announced a host of new iMessage features, but are they available for iOS 15 and older? New iMessage features will allow users to edit, cancel and mark messages as unread after they are sent. The functions will be placed in the interaction menu, which can be accessed by pressing and holding on iMessage. Currently, the menu allows users to copy or translate a message, but the new feature will add three more buttons: “Edit”, “Cancel sending” and “Mark as unread”.

Apple launched its own iMessage instant messaging service in 2011. It is available on macOS, iOS, iPadOS and watchOS. Unlike WhatsApp, Signal, Telegram and other popular messaging services, it is not available on Android and other platforms other than Apple. There are workarounds for using iMessage on Android, Windows and Linux, but the real app is still missing. Despite its unavailability on platforms other than Apple, iMessage remains incredibly popular among iPhone users. The new features are likely to increase its popularity among iMessage adherents.

According to Apple, the latest iMessage features are only for iOS 16 and above, which means that devices running iOS 15 and older will not receive new features. However, for devices compatible with iOS 16, the ability to edit, cancel and unread iMessages messages will be a great addition and should satisfy users who have been demanding it for a long time.

Not only will the new features not be available on devices other than iOS 16, a new report from 9to5Mac now suggests they’ll also get the rough end of the stick when it comes to receiving edited messages from iOS 16 devices. According to the report, when someone sends an edited message from an iPhone running iOS 16 Beta 2 to a device running iOS 15 or earlier, the latter will receive the edited test as a second message preceded by the words “Edited for”. It’s unclear if this will change with the final stable version of iOS 16, but if it doesn’t, it will lead to a messy chat thread for people using older versions of iOS.

The new features will work as expected for lucky users using relatively new devices that can be upgraded to iOS 16. The Edit button will allow users to edit the iMessage after it has already been sent. The “Cancel” button will delete the iMessage after it is sent, although it is unclear how long the sender will get to revoke their iMessage. Finally, the “Mark as unread” button will allow the recipient to remove the read notification from the message, even if it has already been viewed. It is expected that the new features will change the rules of the game for experienced users who always need more detailed control over how they use iMessage.