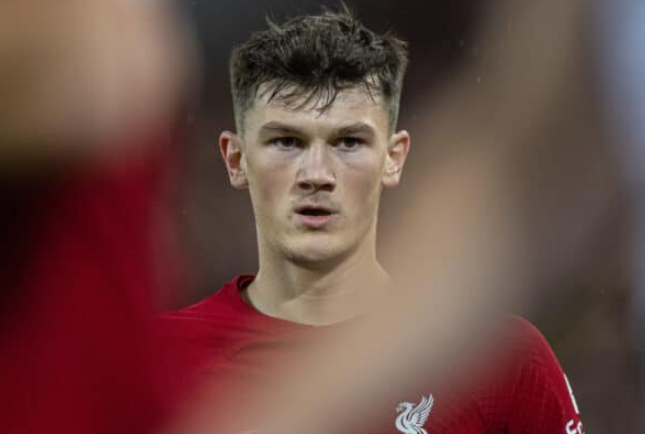 Calvin Ramsay spoke about the “very annoying” injury with which he arrived at Liverpool, setting himself the goal of making his debut in the Premier League.

Although he completed his £6.5 million move from Aberdeen in mid-June, it wasn’t until November that Ramsay made his first appearance for the Reds.

The injury, discovered during a medical examination on the first day of pre-season, kept the right-back out for almost three months before he regained his fitness in the under-21 team.

He now works in the first team full-time and spoke about his “very disappointing” start in an interview with LFCTV in Dubai this week.

“I just signed a contract with the club and just wanted to come in, get to work right away and start training and playing,” he explained.

“But I found out at the medical center that I had a stress fracture of my back, and it wasn’t the best news.

“I’ve been away for a few months with this, but I’ve just been working hard at the gym every day, trying to get back in shape as much as possible.

“Now that I’m back in training, I’m just enjoying it and hopefully I can get some game time.”

Ramsay made his debut for the Scotland national team shortly after the break in the Premier League, but in their absence at the World Cup, he was able to focus on club affairs.

The 19-year-old could be one of those who will benefit most from Liverpool’s mid-season training camp as he hopes to attract Jurgen Klopp’s attention and increase the number of minutes on the pitch.

“I just [want to] try to get the most out of myself, train hard every day and try to make an impression,” he said.

“The main thing is to impress the manager.

“Obviously, there are a couple more friendly matches with Lyon and Milan, so if I can spend a few minutes in them, it’s good for my fitness and to be ready to play in the second half of the season.”

Ramsey made his Champions League debut when he came on as a second-half substitute in a 2-0 win over Napoli, which he called “an amazing moment.”

After that, he hopes to make his Premier League debut in the coming months, which can be helped by Trent Alexander-Arnold’s work in the England national team at the World Cup.

“This is what every young man wants to do, play in the Champions League at the highest possible level,” he reflected.

“I was just lucky that I managed to make my debut. My family’s presence was also special, so I was thrilled about it.

“[Playing in the Premier League] is our goal now.

“I just need to keep working hard, it’s a good chance to show what I’m capable of and hopefully when we get back I can make my Premier League debut too.”

The D.C. President is Supposedly Almost Gone due to the cancellation...