Home Sport Calvary of Samuel Umtiti: Only 22 games since the World Cup 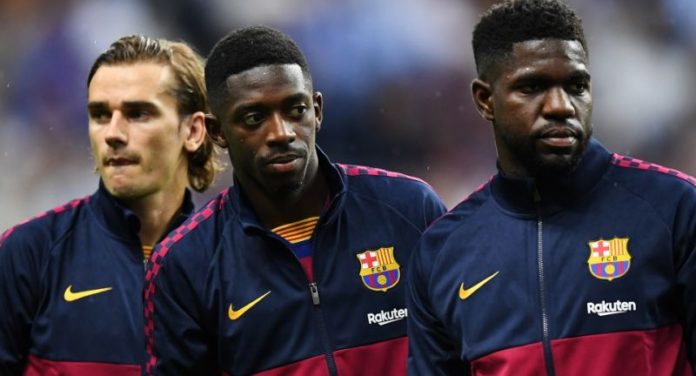 Samuel Umtiti lived one of the happiest moments of his career in July 2018 when he won the World Cup in Russia with France. The central played the tournament with discomfort in the knee but the risk was worth it after finishing the title but that risk has forced him to mortgage the last year of his career, where he has been chaining injuries.

The defender is again touched with some knee problems and has not traveled with the Barcelona expedition to Prague to face Slavia on the third day of the UEFA Champions League group stage. It is a new episode in the long history of the former Olympique de Lyon, who in both his team and in Barcelona has lost the starting position and his place is now occupied by Lenglet.

Last season he only played 15 games with Barcelona, 14 of LaLiga and only 1 of the UEFA Champions League and another 6 with the National Team. A total of 21 meetings with the more than 40 he played in his first two years at the Camp Nou. In fact, this season has only played one game, last Saturday against Eibar and Lenglet has been the holder with Piqué in all the games except in the visit of Seville, where Lenglet was not by sanction and the exit to Ipurúa where the Sanctioned was Catalan. Since July 2018 he has only played 22 games.

Only a few hours after debuting this season, Umtiti has knee problems again and has suffered an inflammation in the cartilage. In fact, his performance has plummeted since he renewed with Barcelona in June 2018 and since then he has not become irreplaceable as a Blaugrana again. The knee injury appeared in September 2018 and only returned to play against Atlético in November, a duel in which he suffered a relapse that had him out until February 2019 and from there at the end of the season Umtiti only accumulated 6 more matches . Umtiti eluded the operating room but the conservative treatment he received did not finish ensuring his recovery.

After making the preseason without problems, Umtiti has only played a paritdo this season and already accumulates two different injuries, one in the foot in September and this new one in the knee. He has fallen in the ranking of preferences of Valverde and now that a new carousel of the matches is coming, an untimely injury has appeared that can again undermine his contribution to Barcelona, ​​where it is becoming less important. A player for whom he fought half of Europe only a few months ago and for which there are no more offers or performance.