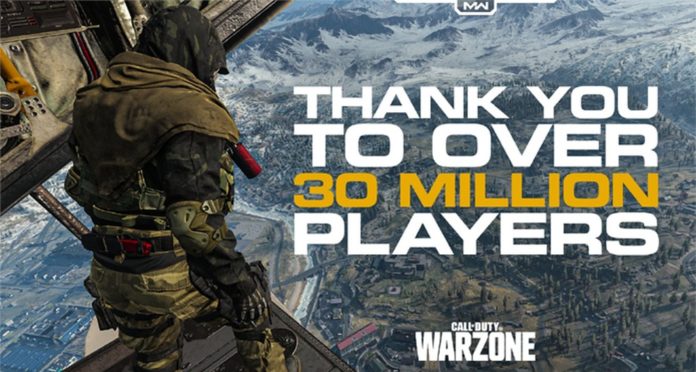 Call of Duty: Warzone, Activision’s free Battle Royale game, reached the mark of more than 30 million players in just 10 days, as released by the producer last Friday (20). The title, which was released by surprise on March 10, reached more than 6 million competitors in its first 24 hours. Recently, the game also reached the mark of 15 million users in four days, a number that was also quickly surpassed. Remember that Call of Duty: Warzone is available for download on PlayStation 4 (PS4), Xbox One and PC through the Battle.net digital store.

The trajectory of Call of Duty: Warzone is similar to that of another Battle Royale game in trios that was also released by surprise: Apex Legends. Within a month, the Electronic Arts game already had a base of 50 million users and, in total, reached more than 70 million competitors in its first year.

Call of Duty: Warzone seems to go down the same path of success and may even surpass the marks hit by Apex Legends. The number of players may also have received a boost due to the quarantine period due to the pandemic of the new coronavirus.

Recently, Call of Duty: Warzone received a new “Battle Royale Solos” mode that brings the tension of Battle Royale games with the player alone on the map, as in PlayerUnknown’s Battlegrounds. Activision also commented that the company is already undergoing internal testing to increase the total number of players in the game, from 150 to 200.

See Also
CoD: Mobile started with the theme of "Conquest"

They detect a serious vulnerability in Microsoft Outlook

MIT Fit Tens of Thousands of Artificial Brain Synaps into a...

All PS4 games are released in September 2020