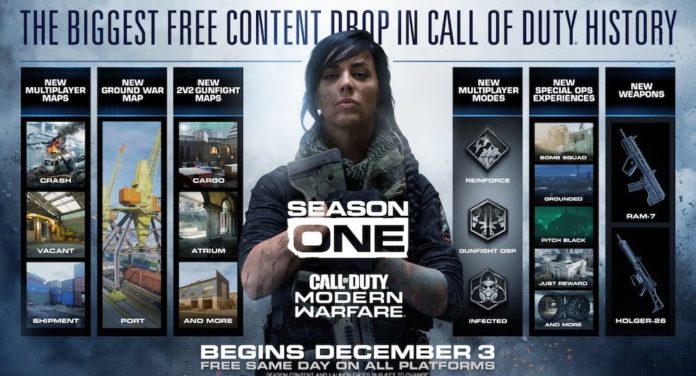 New update of the popular first-person shooter Call of Duty: Modern Warfare has been released. With the new update, new multiplayer modes have been added to the game and significant balancing changes have been made to the weapons.

The new update of Call of Duty: Modern Warfare that brings innovations to the game has been released. With the new update, new modes and weapon balances have been added to the game, as well as some bug fixes. The changes were largely made on the multiplayer modes of Modern Warfare.

First, Deathmatch Domination, a combination of two different modes, has been added to the game. Publisher Activision says the new mode is a mix where you can win prizes by hunting rival players while performing tasks.

Another mod that came to Call of Duty: Modern Warfare was Gunfight Custom. This mod is the same as the 2v2 Gunfight mode, but now you can fight with equipment you set yourself instead of using the weapons given by the game at the beginning of the round.

Weapons balanced in Call of Duty: Modern Warfare
In addition to the new modes, some changes have been made to the multiplayer maps. The Winter-themed Winter Docks map has been removed from the game list and the Capture the Flag mode has been added to the Quick Game filter. Finally, Shipment 24/7 mode is back and replaced Shoot the Ship.

Coming to gun balances; submachine gun MP5 and assault rifle M4, the two most used weapons in the game, were nerfed. The MP5’s headshot multiplier has been reduced. So head-knocks won’t be as deadly as before. In addition, the range of the weapon has been reduced. Likewise, there was a significant reduction in the headshot damage of the M4. On the other hand, the range of the M13 has been increased and headshot damage has been increased by a small amount. Apart from weapon balances, some in-game bugs have been fixed.

Call of Duty: Modern Warfare Season 1 will end in the next few weeks, and developer Infinity Ward is currently preparing for Season 2. While the start date of Season 2 is not yet clear, it will likely start right after Season 1.

Gloves where you can control heat from your phone: Candle Gloves