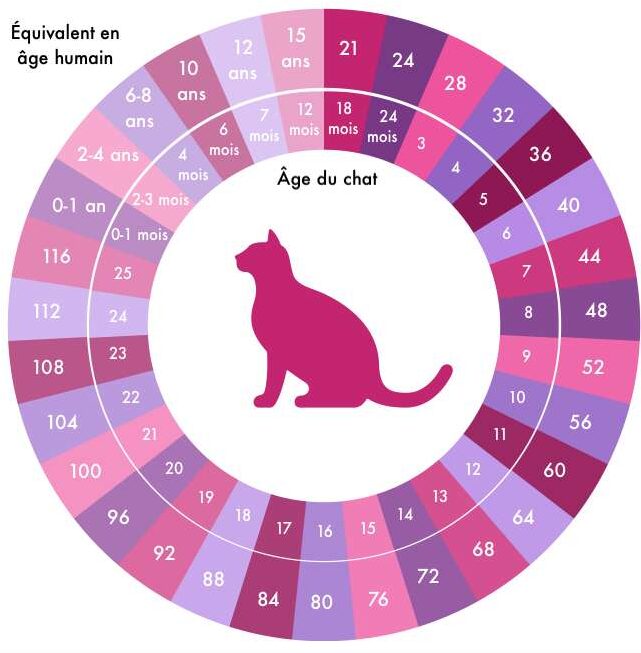 The life expectancy of a cat varies between 13 and 17 years depending on the species and the living conditions. A relatively advanced age if we compare it to the equivalent for a Man. Thanks to our infographic, easily calculate the “human” age of your cat.

We usually say that a year in the life of a cat is equivalent to seven years of human life. In reality, it is a little more complicated than that, because the cat reaches a mature age more quickly than the human. It is estimated that a 12-month-old cat corresponds to a 15-year-old adolescent and that at 24 months of age he reaches “adult” age, that is to say 24 “human” years. Then, each additional year ages it by approximately four years in human equivalent. If your cat is nine years old, this is 24 + (7×4) = 52 years old. After 20 years, a cat can be considered as “centenary”. It is not an official formula, however, and aging depends on many factors. However, calculating the age of a dog is even more complicated due to the big differences in size!

What is the lifespan of a cat?

A cat living outside thus sees its lifespan divided by two, in particular because of the risks of accident and the risk of infectious or parasitic diseases. An overweight cat will see its age increased compared to its congeners. Certain breeds are also known to live longer, such as the Burmese (16.1 years on average), the Burmese (14.3 years), the Siamese (14.2 years), the Persian (14.1 years), or the British shorthair (11.8 years old). As in humans, the cat lives longer than the male (1.8 years on average) and a sterilized cat has an additional six months compared to an unsterilized cat. The first pathologies linked to aging such as osteoarthritis and renal failure generally appear around 10 years of age.

See Also
A Double-Faced Cat Was Born In The U.S.

According to the Guinness Book of Records, the oldest known cat called Crème Puff lived up to 38 years and three days, or 169 years in “human” age! Jeanne Calment’s record is widely beaten!

The Unemployment Crisis Is Growing Increasingly