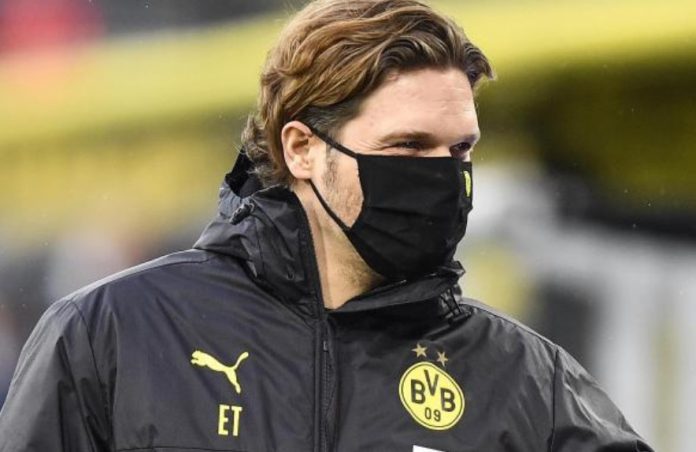 After three defeats in their own stadium, the Revierclub was spared another setback in the Bundesliga in a hard-fought 2-0 (0-0) win over VfL Wolfsburg. Thanks to the goals of Manuel Akanji (66th minute) and Jadon Sancho (90th + 1), Lucien Favre’s successor Edin Terzic improved to fourth place on Sunday.

“I’m just glad the ball went in,” said goal scorer Akanji of his headed goal, which acted as a chest release. In contrast, the North Germans remained in the eleventh league game in a row against BVB without a win. “That is very, very bitter for us. We will work through the game and try to do better next week,” said VfL sporting director Marcel Schäfer after the second defeat of the season for Lower Saxony, who are now sixth.

The striker Erling Haaland, who had been sorely missing for weeks and who had torn a muscle fiber at the beginning of December, was supposed to give Borussia more depth and speed to the last sluggish attack game. His comeback comes just in time with a view to the other difficult games in January against Leipzig, Leverkusen and Mönchengladbach. “This month is definitely crucial for the rest of the Bundesliga,” said BVB coach Terzic in the Sky interview before the game.

But the return of Haaland initially fizzled out ineffectively. The Wolfsburg-based team got off to a better start and missed two top-class chances by Xaver Schlager (5th) and Yannick Gerhardt (6th) in the early stages.

Only then did BVB find tried and tested means to get rid of the committed pressing of the “wolves”. Marco Reus (10th) failed from close range to keeper Koen Casteels. Nonetheless, the North Germans remained an uncomfortable opponent. A handball by BVB midfielder Axel Witsel (21st) in his own penalty area after Renato Steffen’s header was checked by the video referee, but it was not punished as worthy of a penalty.

See Also
Valverde: "This match is one of the keys of the classification"

However, both teams could not maintain the high pace of the early stages. Both Wolfsburg and Dortmund were now trying to build up the game in a more controlled and calm manner. Nevertheless, BVB had two good opportunities to take the lead before the break. First Reus (43.) failed shortly before the goal line with a pass to Haaland, three minutes later Jadon Sancho missed the empty goal.

Even after the restart, both teams continued to duel at eye level – with slight advantages for BVB. It was only thanks to the strong reaction from goalkeeper Casteels in the 53rd minute that Haaland’s shot did not land in the Wolfsburg net.

But Borussia’s committed and focused work still paid off. After a corner from Sancho, defender Akanji headed to the spot and gave his team the lead they deserved with his second goal of the season. This means that four of BVB’s last six competitive goals fell after a standard situation.

Substitute for the tired Haaland Steffen Tigges could have increased it to 2-0 with his first shot, but VfL defender John Anthony Brooks saved just before the goal line (82nd). Then Sancho made everything clear with a counterattack in stoppage time.