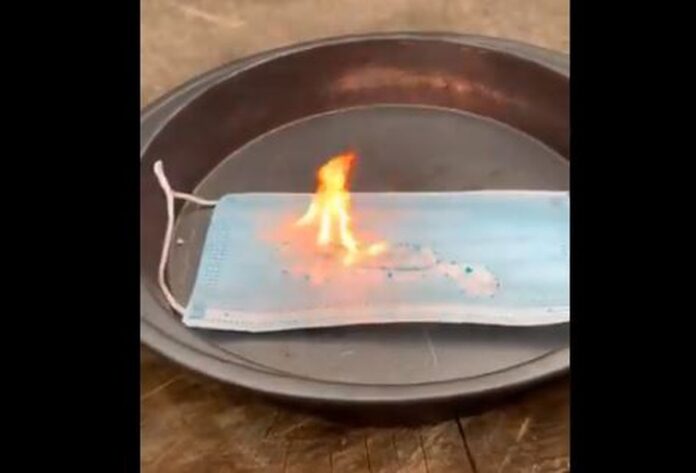 As coronavirus incidents continue to increase in the U.S., it released a video calling for the burning of masks in a Facebook group set up by business owners and employees who lost their income during the epidemic.

The United States (USA), which is one of the countries that have experienced the COVID-19 epidemic the hardest, is now facing an interesting challenge, namely the challenge. ReOpen NC, a Facebook group created by employees and their business owners whose income has decreased, has released a video calling on members to burn their masks.

Mayor of Raleigh, the capital of the state of North Carolina, Mary-Ann Baldwin, announced last Wednesday that it will be mandatory to use masks throughout the city. Ashley Smith, co-founder of the ReOpen NC group, which has signed many campaigns against the restriction of their freedom in the quarantine process, said they will not abide by this ban and will resist.

In the video he shared, Smith claimed that the masks would not prevent the spread of COVID-19 and set the face mask on fire with the lighter he took out of his pocket. Putting the burning mask inside the cast ceiling, Smith said he challenged everyone watching this video. In a second video shared in the group after this video, we see a person cooking sausages on a burning mask.

The odd thing was that the #IgniteFreedom tag was used in videos where masks were burned. The label in question represents the campaign launched by the Swiss-based humanitarian aid organization Youth Underground in January to draw attention to the fight against human trafficking.

There are more than 500 posts under this tag on Instagram and almost all of them are related to the campaign of Youth Underground. In the meantime, let’s not go without saying that # BurnYourMaskChallenge found no response on Twitter and TikTok.

In the state of North Carolina, where the ReOpen NC group opposed the mask requirement, 1,002 new coronavirus cases were reported on Wednesday. The total number of COVID-19 cases reached 21,548 in the state, where 997 new cases were reported in the last 24 hours. The number of people who lost their lives increased by 4 in the last 24 hours to 621.