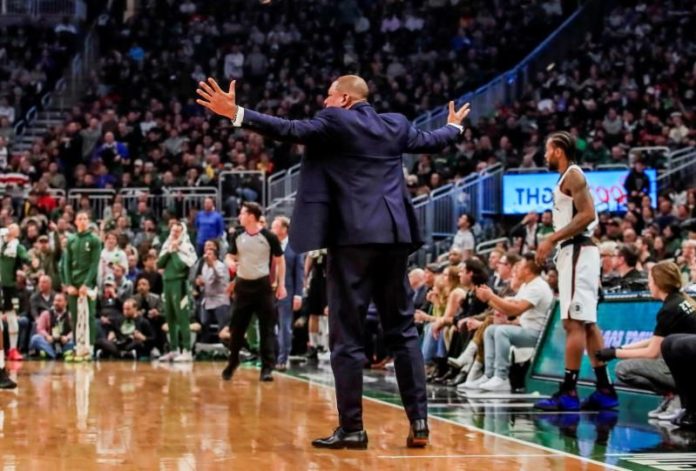 In a day of teams with winning streaks, the Milwaukee Bucks, emerged as the main protagonists after achieving 14 straight wins.

The Los Angeles Lakers added their third straight win, while the Boston Celtics and the Miami Heat maintained their unbeaten status on their court (9-0).

Greek power forward Giannis Antetokoumpo had 27 points and 11 rebounds double-double with the Bucks that beat the Los Angeles Clippers 119-91.

In turn, Khris Middleton added 17 points and Turkish reserve Ersan Ilyasova added 13 in the victory of the Milwaukee team.

For the Clippers, forward Kawhi Leonard scored 17 points as the leading scorer, but never had the option of winning the individual duel against Antetokounmpo, who was faced for the first time since the last passes of the Eastern Conference when the new player of the Angelino team was with the Toronto Raptors, current NBA champions.

Power forward Anthony Davis achieved 39 points and nine rebounds that left him as the leader of the Lakers, who were imposed at home by beating 113-136 against the decimated Portland Trail Blazers.

The victory was the third consecutive of the Lakers and the thirteenth in the last 14 games they have played, allowing them to have the best mark in the Western Conference (20-3) and tied with the Bucks in the best in the league.

The forward LeBron James added 37 points, seven rebounds and eight assists in the attack of the Los Angeles team, which allowed him to win the individual duel to his friend forward Carmelo Anthony (15 points).

The Trail Blazers not only lost the game but also to guard Rodney Hood, who suffered a ruptured left Achilles tendon in the first quarter of the game.

Also the Trail Blazers coach, Terry Stotts, was expelled – first time in his career – at the end of the third quarter after protesting a foul that was granted to Davis and earned him a double technique.

The forward Jayson Tatum got 26 points as the leading scorer for the Celtics, who beat the Denver Nuggets 108-95, and won for the fifth time in a row, which allowed them to remain undefeated in their TD Garden field (9-0) .

No professional team in the Boston area has lost at home since in the majors, the Baltimore Orioles beat the Boston Red Sox at Fenway Park on September 28.

Escort Jimmy Butler got his second triple-double of the week for the Heat, who beat the Washington Wizards 112-103.

The Miami team improved their brand to 9-0 in games held in their field for the first time in franchise history.

The Magic got their fourth consecutive victory after starting the season with a 2-6 mark, but they already have it positive (11-11) for the first time.

Base Collin Sexton (19 points) led the Cavaliers, who already have power forward Kevin Love as transferable.

The center forward Andre Drummond got double-double 25 points and 22 rebounds as the leading scorer for the Detroit Pistons, who won the Indiana Pacers 108-101, and won the third win in the last four games played.

The power forward LaMarcus Adridge had double-double 19 points and 13 rebounds that helped the San Antonio Spurs complete comeback and win in extra time, for the second time in a row, after defeating the Kings of Sacramento 105-104.

The Spurs added three victories in the last four games after losing 12 of 14, although the win last Tuesday against the Houston Rockets is under investigation by the NBA.

Base Chris Paul scored 30 points, his best season mark, with the Oklahoma City Thunder, who won the Minnesota Timberwolves in extension 139-127, who also had another baseman, Jeff Teague, as their leader by contributing a double-double of 32 points and nine assists.

Gareth Bale: Nowhere medical but does not play either