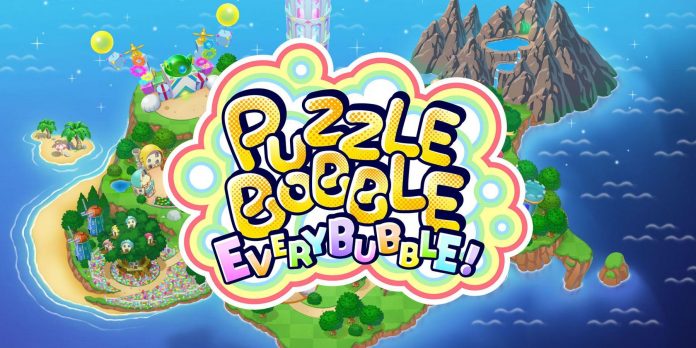 Puzzle Bobble Everybubble! A cooperative game for four players will allow a group of friends to experience the story of the game in its entirety together. Each player will control his own little dragon, which can aim and shoot bubbles at will. Only by working together, players will be able to complete each Bobble puzzle Everybubble! by popping colored bubbles, matching sets of three or more.

For the first time in the series, the main characters of Bubble Bobble Babu and Bob will be joined by two completely new characters. Their names are Peb and Pub, a pair of female dragons with a bow, yellow and pink, respectively. Four dragons will explore the setting of Rainbow Island, helping a mysterious character named Minirun, who is very similar to Baba. The conflict of the game, of course, includes a significant number of bubbles that need to burst in order to save the Rainbow Island.

Puzzle Bobble Everybubble! The trailer offers a first look at what cooperative gameplay looks like for a puzzle game. All four players can freely shoot their bubbles, making only a short forced pause between shots. Everyone can shoot everywhere on this map, if his trajectory of the shot allows it. That means Puzzle Bobble Everybubble! players can help (or hinder) their teammates if they get into an unpleasant situation.

Relatively little is known about Puzzle Bobble Everybubble!, although admittedly it is a very simple game. The big unanswered question is whether Puzzle Bobble will be Everybubble! will offer an online cooperative or if it will be available exclusively locally. There is not a word about this in the announcement of the game. It should be noted that there is no mention of a game requiring a Nintendo Switch Online subscription for a multiplayer game, which implies that it is intended only for a local game.

The modern revival of Bubble Bobble with the release of Bubble Bobble 4 Friends in 2020 has been well received by fans of the classic franchise. Puzzle Bobble Everybubble! The return of arcade action from the spin-off series of puzzles, now with a joint game for four players, certainly deserves no less approval. Fans can expect that as the release of Puzzle Bobble approaches in 2023, a lot more gameplay will be revealed.

Puzzle Bobble Everybubble! it will be released in 2023 on Switch.