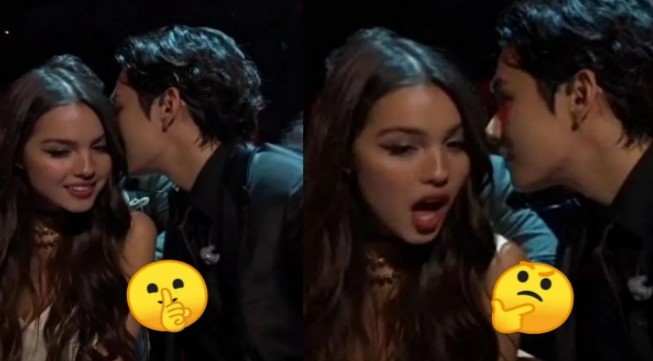 GRAMMY night was full of all kinds of emotions for BTS and ARMY. However, one of the moments that stole the night was V’s flirtation with Olivia Rodrigo during Butter’s presentation. The idol finally told his fans what he had told him.

BTS’s Vee and Olivia Rodrigo shared a moment during Butter’s performance at the 2022 Grammy Awards. The entire internet couldn’t help but show their curiosity, wanting to know what Taehyung said to Olivia when he approached her to whisper. The South Korean idol finally told what he said.

For many K-Pop fans, the Grammy Awards night was filled with all sorts of emotions. Thousands of fans around the world supported the South Korean band in its second Grammy Award nomination.

However, despite the fact that BTS did not win in the “Best Group/Duo” category, they definitely won and won the hearts of many viewers of the ceremony. Especially with his presentation of “Butter”.

Through the Weverse platform, Taehyung decided to answer questions from his fans, especially related to his performance with American singer Olivia Rodrigo, during Butter’s presentation at the 2022 Grammys.

On the platform, a fan asked what she whispered in Olivia Rodrigo’s ear, as the scene turned out to be very cool, beautiful and sad. To which Taehyung replied: “It was about an important matter, you know how it happens among professionals.” And I didn’t even say it in English.

Idol joked with his fans for a while, referring to the fact that he does not know English, and Olivia Rodrigo probably does not know Korean either. After a few joking answers to his fans, Taehyung admitted that he couldn’t remember what he said to Olivia, as he was so nervous about the performance that he hadn’t completely forgotten about it. He mentioned that he probably told her in English, “Now you should be surprised.”

Many fans mentioned that Taehyung was a little nervous during the performance. One particular fan took a close-up of the scene after V whispered to Olivia that he should drop the letter. The fan mentioned that the idol’s hand was shaking a little, just before throwing the letter to Jungkook.