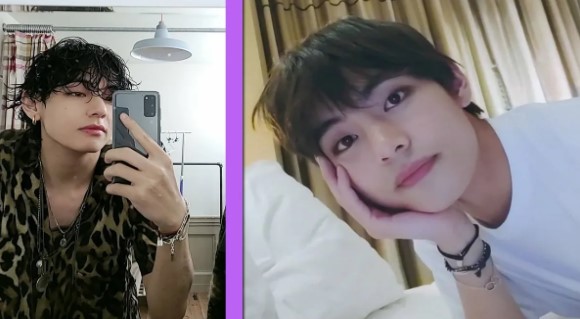 ARMY always shows their support and affection to the members of BTS, but one day V was able to see very closely the affection they have for the K-Pop band, how did you get to chat with fans?

We know that BTS is the most popular group at the moment, their fans are all over the world, but in addition to the number of admirers, this fandom stands out for the dedication and support they show in each release, whether musical or any other project. .

The members of this K-Pop band keep in touch with fans on different online platforms and although having an interaction with them is not an easy task, it is not impossible either, only that there are those who have been even luckier in unexpected moments.

Taehyung revealed that he once infiltrated a chat where there were BTS fans and he was able to chat with them, only he saw some messages that surprised them a lot.

The singer of Winter Bear told his fellow Bangtan Sonyeondan that one day he was playing online and suddenly the chat activity increased, someone asked if the others liked BTS and he was the first to answer yes, but nobody in that conversation I knew that he was a member of the group.

However, Taehyung also sent a message saying that he didn’t like V, pretending to be an anti of himself. oops!

BTS FANS SHOW V THEIR GREAT LOVE FOR THE GROUP

When he said that he didn’t get any bad comments in response, but instead, the fan who asked the original question told him that all the members were equally valuable and precious to her.

V was surprised because that ARMY had Suga’s name on his username, but the response he got warmed his heart for the beautiful message he gave him.

We also tell you what are some of the anime that Taehyung watches, these are his recommendations.

Olivia Rodrigo And Dove Cameron Impact With Their Halloween Looks