Home Entertainment BTS’s Taehyung Dances With a Girl and The Whole ARMY Dreams of... 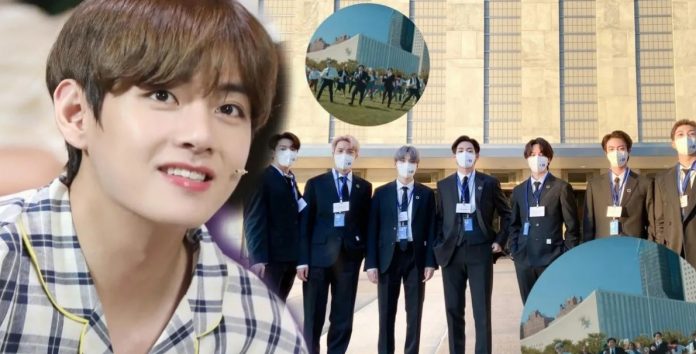 BTS sang during their visit to the UN General Assembly but there were many surprises. ARMY’s gazes were attentive to BTS’s speech and presentation at the United Nations event, Taehyung led fans to discover a new dream.

The idols showed their great impact and gave a speech in front of different world leaders who take an important role in the decisions and plans for the planet, BTS moved all their fans with their arrival at the United Nations General Assembly but also the idols. they prepared a performance for the event.

The show was filmed in the same place and was projected on screens, those present did not hesitate to take some videos or photographs and meanwhile, Bangtan Sonyeondan fans shared their great joy on social networks.

However, the more times we see this presentation of Permission To Dance more details can discover and that was just what happened when ARMY noticed a peculiar detail in dance V.

Although the performance begins with only the idols then we see a large group of people join in the choreography, at one point it seems that they all jump and dance in a random way to show a collective joy, but when we look closely we can see that they do not. it was exactly like that.

When Taehyung turned around, he coordinated his dance moves with a girl’s, and that continued for just a few seconds, but every fan can agree that that instant was enough to imagine how exciting the experience must be.

For that reason, they did not take long to start some comments showing that many would like to be in the place of the lucky girl, because seeing V appear in front of you after a turn must be a dream.

The Last Kingdom Season 5: Alexander Dreymon explains why the series...

PS Plus Runs A Special Limited Promotion: 12 Months For Half...