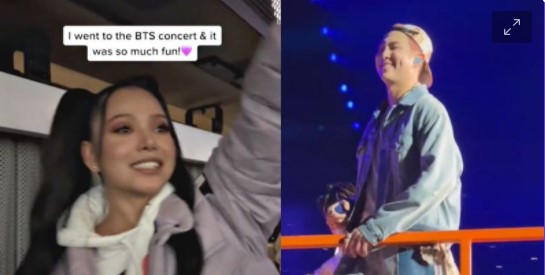 The popularity of BTS in recent years has risen to exorbitant levels and this is how even great personalities from the entertainment world have joined the ranks of ARMY and one of the ones that has caused the most stir in the fandom is Bella Poarch, who has shown his love to BTS’s RM.

On several occasions we have witnessed how Bella Poarch is one of the largest ARMYs that exist among celebrities and this has been demonstrated by the influencer through the content that she publishes on her official social networks and on her TikTok account.

But not only is she in love with the talent of the septet, but she has also been captivated by the beauty and charisma of RM, the leader of BTS, who we are sure has been able to show a little of the infatuation that the singer also shows, since recently He smiled at her in person when he saw her in the audience.

Bella Poarch attends BTS concert and RM smiles at her

In recent weeks, the Bangtan Sonyeondan have been quite busy fulfilling a series of commitments to close this 2021 with everything. They are currently in the United States, a country where they attended awards presentations, television programs and their first face-to-face concerts after more than a year of moving away from ARMY due to the global COVID-19 pandemic.

The first shows with an audience as part of the ‘Permission To Dance On Stage’ tour, have taken place at the SoFi Stadium in Los Angeles, California and from the first date, which occurred last Saturday night, November 27, brought a large amount of surprises that have been talked about. The last of them has been Bella Poarch’s attendance at one of the last shows.

But not only did she get ARMY’s attention by attending, but she also made us feel all the envy in the world after she showed off how BTS’s RM smiled at her from the stage.

This was shared by Bella Poarch on a TikTok. Just at the moment of the concert when the septet walks around the plate of the venue on a platform, you can see how Namjoon focuses his gaze on the singer for a few seconds and smiles quickly.

Some ARMY assure that BTS’s RM actually made that gesture for all the fans but, whatever the case, the “Build AB * tch” singer is fortunate anyway for the fact that she was able to attend, very close to the stage, to one of the ‘Permission To Dance On Stage’ concerts.

What do you think? Do you think RM smiled at Bella Poarch or at the whole ARMY? Leave us your comments and remember to follow us on our social networks for more information about BTS and your favorite artists.

Jennifer Aniston in a relationship with a mysterious man?