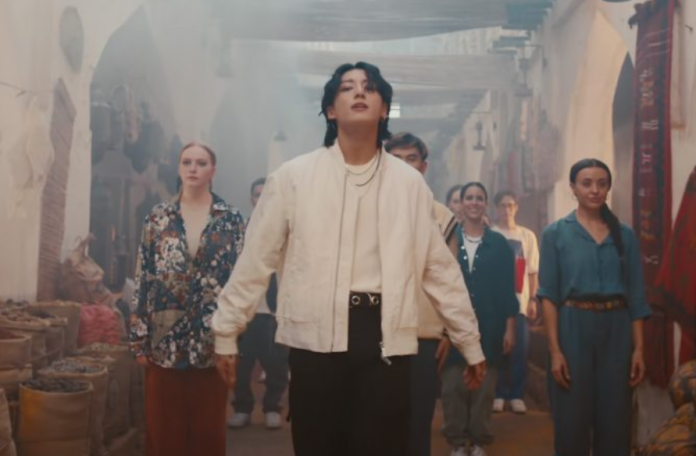 BTS’s Jungkook has released the official music video for his latest single “Dreamers”, released as the soundtrack for the 2022 FIFA World Cup.

Yesterday (November 22), the official accompanying visual series for “Dreamers” was published on the official FIFA YouTube channel. In a music video shot in Qatar, the K-pop idol tours the city and gets acquainted with its culture and sights, performing a song together with Qatari artist Fahad Al-Kubaysi. See here.

The video of “Dreamers” appeared a few days after Jungkook performed this song live for the first time at the opening ceremony of the World Cup last weekend (November 20) with Fahad Al-Kubaysi. A studio version of the song was released on the same day.

The release of “Dreamers” was Jungkook’s second solo single of the year. In June, he joined forces with American singer-songwriter Charlie Puth in the song “Left and Right”. The single earned Jeongguk two nominations for the upcoming People’s Choice Awards in the categories of “Music Video of 2022”, as well as “Collaboration Song of 2022”.

Jungkook’s band BTS was nominated for three separate awards at the 65th Annual Grammy Awards, as the Recording Academy announced last week (November 16). The seven-piece band is competing for the best pop performance by a duo/group for the third year in a row with their Coldplay collaboration single “My Universe”, their first album of the year, awarded as a featured artist in Coldplay’s “Music of the Spheres”. and also the best music video for the song “Yet To Come”.

Meanwhile, BTS bandmate RM is currently preparing for his solo debut with “Indigo”, the full release of which will take place on December 2 at 14:00 Korean time. The album is described in the new teaser as “the last archive of my twenties” and “documentation of my youth at the time of the independent phase.” Although “Indigo” will be RM’s debut solo album, the rapper has previously released two mixtapes: “RM” in 2015 and “mono” in 2018.