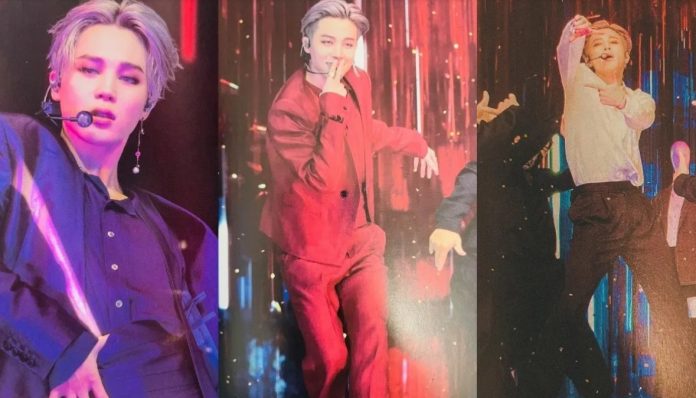 ARMY, you will agree that BTS Jimin’s Filter is never exceeded, it is enjoyed, but what is the secret behind the look change?

Filter is one of the most iconic solos of Jimin from BTS, in the live performance he drastically changes his look on stage and it was one of the most epic moments of the choreography. How do I do it?

The record material Map Of The Soul 7 BTS left us musical gems like Filter of Jimin , only on YouTube racked up over 70 million views and added platform Spotify million.

Jimin showed his Latin and charismatic side, ARMY eagerly awaited the star’s choreography and they finally achieved it at a BTS online concert, being a success and becoming a trend in social networks.

If you saw the choreography of Filter, surely you will remember that Jimin was dressed in a white shirt, black patent leather boots that made a good mix with his pants of the same tone, as the performance progressed, he played with a white jacket, scarf, and glasses, so that almost at the end he changed his look to a fiery red suit.

HOW DID BTS’S JIMIN CHANGE HIS OUTFIT DURING FILTER’S PERFORMANCE?

On the second day of Bangtan Sonyeondan’s online concert , Jimin opted for an all-black outfit and the outfit change was the same style of suit that, due to the reflections of the lights, turned wine and blue.

Well, at that time ARMY wondered how the singer of K-Pop managed to make a makeover so fast and in the scenario, the secret is a trick and quite fast.

Before transforming their look, the dancers did a line formation and Jimin was placed in the back, just when he threw the hat, his shirt, and pants, he was left with the colored suit, because under his first outfit he already had the other outfit .

Jimin applied the double look, which was not easy because taking into account that Filter has a demanding choreography, wearing a double layer of clothing can make the dancer feel a little heavier, but for him, it did not represent any problem and he controlled it like the big.

Selena Gomez Said She Was Lonely. She Was Then Seen Holding...