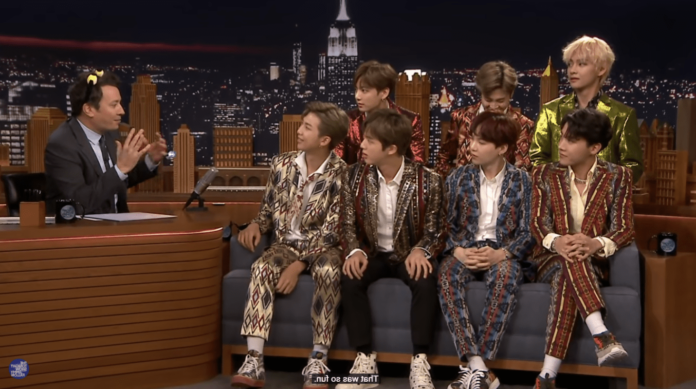 For a few weeks BTS has been on a promotional tour of the United States.

For his musical return, BTS has concentrated on making appearances in the American media, on awards and events to which they are invited.

They were as guests at the Billboard 2020 Awards , sang an ‘ Old Road Town ‘, alongside Lil Nas X and for the first time presented the group choreography of ‘ Black Swan ‘ on the James Corden show . ‘ The Late Late Show ‘ is one of the programs nocturnal most watched of the American Union.

.@BTS_twt is coming back to #FallonTonight and Jimmy wants to ask them YOUR questions! Tweet your questions for BTS using the hashtag #FallonAsksBTS! pic.twitter.com/rDJfU8A6nM

It has recently been confirmed that BTS will be featured on the show hosted by Jimmy Fallon called, ‘ The Tonight Show ‘ broadcast on MBC ; During the live show , Fallon, in surprise, declared that BTS will be as a special guest .

With the hashtag #FallonAsksBTS , the program is asking the group’s fandom to send their questions , so if you have any questions about the 7 boys, send your tweet to be able to interact during your stay at BTS’s ‘ The Tonight Show ‘ ; This is not the first time the group will be invited to the show , since they were a year ago.

Keep tweeting us your questions for @BTS_twt using #FallonAsksBTS! pic.twitter.com/EZ6vp6iENs

It is said to be one of the last presentations of the group in the United States, as they will soon return to South Korea to finish adjusting some details for the official comeback , with their record material ‘ Map of the Soul: 7 ‘, which officially premieres on February 21.

BTS: ARMY helps V use Instagram and they make the best...