Home Celebrity BTS WELCOME YOU TO 2020 WITH YOUR PRESENTATION IN NEW YEAR’S ROCKIN... 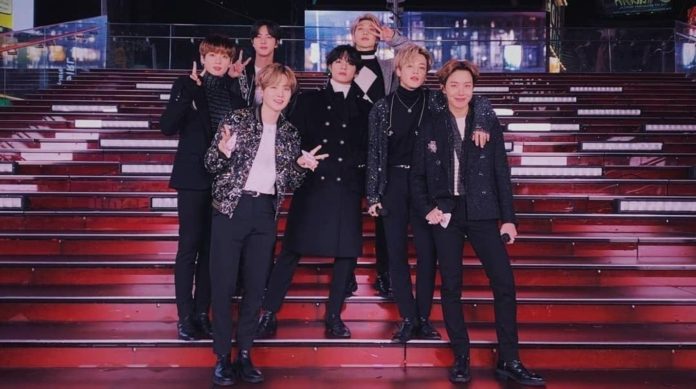 2019 has officially been in the past. The last months have represented a before and after in the career of the BTS boys, who managed to make history and break records many times. A new stage is about to begin and the idols welcomed the 2020 in ‘New Years’ Rockin ‘Eve’.

In case at the time of your presentation you were in full family dinner and you could not see it, here we will tell you what happened in the show that BTS offered in the Times Square in New York.

The emotions were very strong before, during and after the presentation of BTS. A lot of ARMYs met in Times Square with the illusion of closing 2019 and receiving 2020 seeing the boys live and direct, and so it was. From the moment they made a presence in the place, everything changed.

Thank you @PostMalone, @BTS_twt, @SamHuntMusic, @Alanis and @jaggedmusical for ringing in the new year with us in Times Square! #RockinEve #Hello2020 pic.twitter.com/FdPduUUBVF

When the time came for the show, BTS began performing ‘Make It Right’ and revealing at the same time the choreography of the song, which left more than one fan breathless. This is the first time that idols accompany this song with their spectacular dance steps, it was certainly a unique moment.

Towards the end of the song, the boys began to climb the stairs to go to the stage while Yoongi rapped, it was there when they performed ‘Boy With Luv’ while the fanchant sounded in the background.

Jimin gave us a magical and fun moment when he decided to put his sweater on his head and continue with the show. LOL!

BTS was also present at the time the countdown began for the New Year to begin. The emotion face of idols is priceless. Did you like his presentation in ‘New Year’s Rockin’ Eve ‘? Leave your comment.