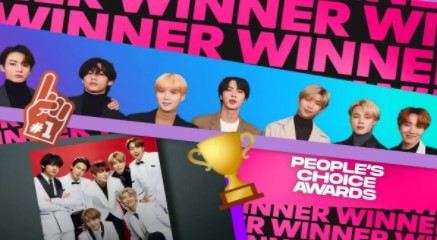 The popularity of BTS in 2021 was astonishing and the multiple awards that the musical group has received are faithful proof of this, in addition to being well recognized by such important galas as the People’s Choice Awards.

The United States television network E! Every year Entertainment organizes the People’s Choice Awards, which reward the most outstanding in film, television and music; They take into account the great popularity of musicians and actors who are faithfully supported by their fans.

This is why this year we could see in their nominations K-Pop groups such as BTS and TXT, seeking to recognize the great work that these types of bands do within music, since they manage to conquer millions of fans throughout the world. world, becoming a worldwide phenomenon

Bangtan Sonyeondan has already been recognized in different international awards that let us see more of the great relevance that the group has, not only in K-Pop, but in the music industry around the world, comparing with international artists and demonstrating a great domain.

HOW MANY AWARDS DID BTS WIN AT PEOPLE’S CHOICE AWARDS?

Yesterday, December 7, at night the PCA 2021 gala was held, E! Entertainment awarded 3 awards to BTS, although the boy band could not attend this event in person, the idols triumphed in the following categories:

Video of the year 2021 with Butter

Song of the Year 2021 featuring Butter

Congratulations, BTS! The work and effort of their idols and ARMY is always well recognized by the most important academies, television stations and awards that note the great worldwide impact that this amazing group has.

Thanks to ‘Butter’, Bangtan was recognized worldwide in some of the most important awards both in South Korea and other countries such as the United States and in Europe, American Music Awards, Asia Artist Awards, Billboard Music Awards and iHeartRadio Music Awards are some of the galas where the Bangtan Boys triumphed during this 2021.

This is how BTS imminently stood out throughout 2021 thanks to their songs and collaboration in this glorious year for idols.

Kanye West announces premiere of his first opera for next Sunday