Home Celebrity BTS: The day Jin graduated from college and everyone celebrated 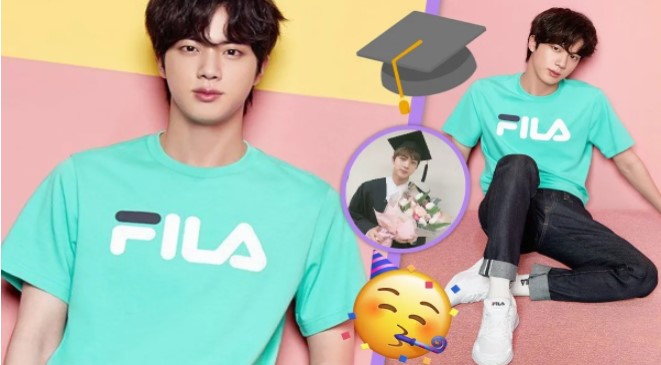 The members of BTS are a great example of life, because these artists have not only led their musical careers, they have also shone academically and Jin did so by graduating from university.

Like Jin, who studied at Konkuk University, specializing in Art and Acting, let’s remember that this idol would love to be part of the world of entertainment in dramas and movies; it was even at this school that she met actor Song Kang.

Seokjin worked hard during his time as a student, despite taking his artistic career at the same time, the member of Bangtan Sonyeondan managed to finish his studies, proving that there are no excuses to pursue your dreams and continue learning.

What was it like when Jin graduated from college? Here we remember how she celebrated with her groupmates and ARMY on this special day.

THIS IS HOW JIN CELEBRATED THE DAY OF HIS UNIVERSITY GRADUATION

In 2017, Jin finished his university studies, becoming a full graduate; His graduation ceremony occurred on the same day that BTS was at the Gaon Music Awards that year, so the idol could not attend his solemn event, but that did not mean that he was not going to celebrate.

All the other members of Bangtan celebrated Kim Seokjin, who in a cap and gown connected to VLive and shared this precious event with ARMY and their friends and groupmates.

This is how Jin celebrated his graduation alongside his classmates who congratulated him, brought him a cake and joked with him, having a lot of fun.

IS JIN FROM BTS STILL STUDYING?

It is known that BTS’s Jin is still enrolled in Hanyang Cyber ​​University, an online institution where he continues to specialize in different areas besides music, so the idol continues to study hard and prepare to present more to his fans.

So now you know ARMY, get inspired by your favorite BTS idols to continue studying and achieve all your dreams and goals.

In other BTS news, know all Jungkook’s phobias and fears, what is Bangtan’s Golden Maknae afraid of?

Rihanna breaks a historic record with her album “Anti”!

Clara Morgane Reveals The Backstage Of Her Japanese Shooting