Home Celebrity BTS: The best moments of J-Hope celebrating his birthday with ARMY 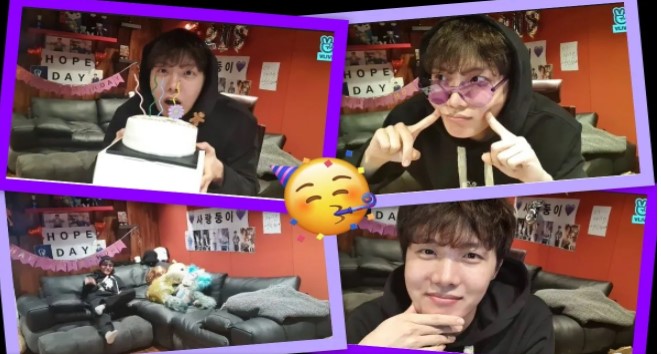 J-Hope could not miss the opportunity to celebrate his birthday with his fans and he did it virtually through a live broadcast, these were his best moments.

Jung Hoseok is one of the members of BTS, he was born on February 18, 1994 and like every year, he is celebrating his birthday; The fans of the boy band have been in charge of making this a very special day for the idol with both virtual and real life projects to celebrate it.

J-Hope is one of the Bangtan Sonyeondan dancers who from a very young age was interested in the stage, before debuting with the K-Pop group, Hoseok was already in a street dance group, he specialized in this discipline and later joined BigHit Entertainment as a trainee.

And in 2013, he finally debuted with the Bangtan Boys, since then we have been able to see J-Hope shine, in addition to evolving and seeing him grow more and more as a person and artist, since he has also released his own solo works, demonstrating more than his talent.

On this day as special as his birthday, J-Hope could not stop spending time with ARMY and joined VLive to spend pleasant moments with his fans and these were the best.

Jin was the first person to congratulate J-Hope and we knew because the latter shared everything on his Instagram, but on his VLive, Seokjin was still present, because he left him a little sign with the phrase: ‘Hello J-Hope, happy birthday ‘ which was part of the background on the stream, awww!

J-Hope showed his birthday cake, it was white and only had the phrase ‘U ARMY HOPE’ in pink letters, this is derived from his Instagram user who confessed that he would almost have underscores, but decided not to use them.

The most exciting for J-Hope

BTS will finally have face-to-face concerts again next March and J-Hope shared his excitement, he is really happy to see ARMY face to face again and he will do it at Permission To Dance On Stage In Seoul.

We’re finally going to do a concert. He really hoped that we could meet and talk to you honestly, and that day will finally come.

BTS’s Taehyung is sick and ARMY still cares about him, so to relieve the fandom a bit, J-Hope said that V is recovering well, don’t worry about him right now, he even called Hobi for his birthday. he; Everyone is fine and the Bangtan idol will surely be fully recovered soon.

New music from BTS and J-Hope

This is how J-Hope celebrated his birthday on VLive and had a very happy time talking with ARMY, the idol continues to celebrate his birthday <3.

In other BTS news, he discovers what makes each album of the group special for ARMY, how is your collection going?

Meet The Winners Of The Seoul Music Awards 2020

Preparing for the serial or movie of Sony 10 PS license