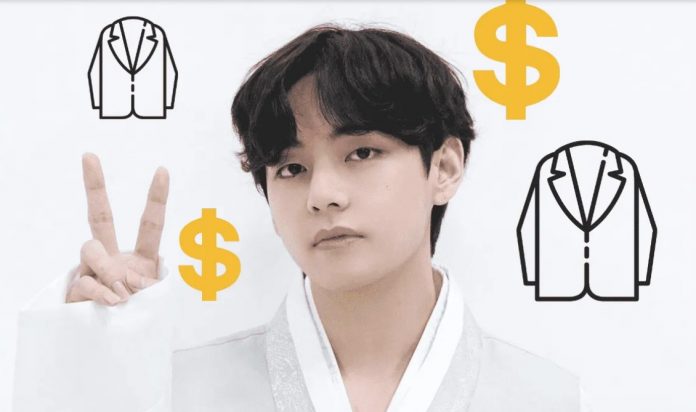 The singer once again demonstrated his influence and power, we explain why? Kim Taehyung is one of the K-Pop stars who stood out in the Korean entertainment and fashion industry for his charming way of dressing, as he likes to combine elegant clothes with comfortable clothes.

The occasions that the Butter singer demonstrated his power and influence on social media after dressing, mentioning, or wearing an outfit are already incalculable and recently the list grew due to his success with a very special outfit.

In September, BTS’s new online concert called PERMISSION TO DANCE ON STAGE was announced with a promotional image, V wore a suit consisting of a jacket and formal pants, and guess what happened a few hours later. The idol sold out his look!

BTS’S V IS THE KING OF TRENDS AND FASHION, WHY DID ARMY ADORE HIS LOOK?

The BTS member wore a gray jacket with buttons and pockets on the sides accompanied by pants of the same color, a light shirt and very colorful decorations on the lapels, also comfortable shoes and in the same color range.

The GRAMMY nominee wore a total look of FEAR OF GOD, designer Jerry Lorenz’s brand, as the promotional photo of the K-Pop band took over social networks, netizens wished with all their hearts the style of the star in their closets.

Here's Taehyung's outfit from fashion line FEAR OF GOD for the BTS Permission to Dance On Stage announcement. If you're interested in purchasing the items, do so quick because items are already being shown as sold out or in limited stock.

ARMY realized that after a few hours of the announcement of the online show PERMISSION TO DANCE ON STAGE , the garments of V’s outfit were sold out in all the online stores where they were available. What did you think of the new feat of the Dynamite interpreter?

Rating of the best model photos of the participant of the...

Sound! Euphonium: What to expect from season 3 (according to ranobe)