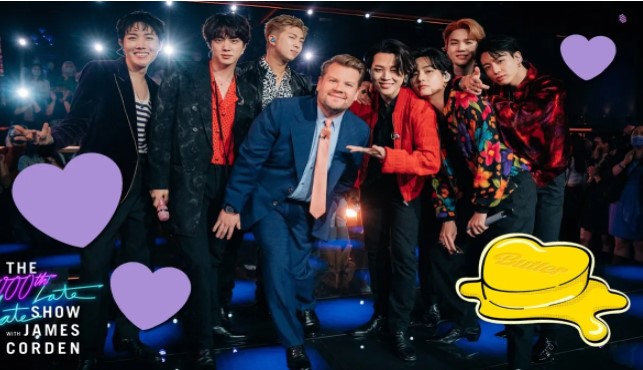 Butter’s performers recently visited The Late Late Show, but the surprises continue because the show still has special clips for ARMY and one of them is this performance.

HYBE idols’ visit to meet as James Corden caught the eyes of fans, the K-Pop singers had fun, chatted, and reconnected with fans they hadn’t seen in a long time.

While ARMY enjoyed seeing BTS on screen, the show has made it known that there are some things that were not shown instantly, as they chose to create several surprises that they will reveal little by little.

It was so recently that The Late Late Show shared a new presentation of Butter that the BigHit group prepared when they visited their studio, but this performance has a celebratory vibe as it is part of what was seen in the 1000th episode of the show.

Jungkook made his way through the crowd as he began to sing his lines of this joyous melody, joining V on his way, and then arriving on stage alongside all of the BTS members.

With a retro vibe, the singers roamed the dance floor as the audience cheered on them. On this occasion the boys did not show the choreography that we already know, but focused on having fun from one side to the other while each one showed their vocal talent.

It was until the final part of the performance that they were placed in a group formation and danced like the great team that they are.

It has been announced that in addition to this video, the idols also filmed another Crosswalk, so again we will see the boys of Bangtan Sonyeondan show their dance steps in the middle of the traffic while the cars wait in front of the red light of a traffic light.

If you want to see the premiere of that extra clip starring BTS, here we tell you when you can enjoy it on television, remember that it is a video that has not been previously revealed so it will surely thrill you.