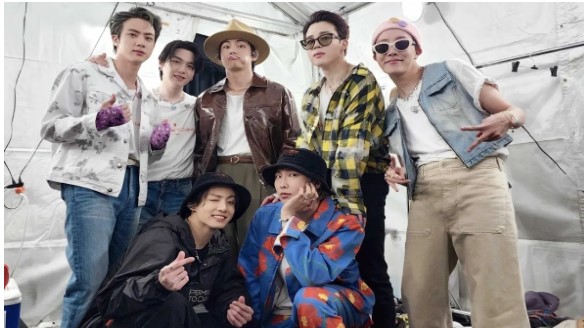 After a long stay in Las Vegas by the members of BTS, they are now back in South Korea and continuing with their busy schedules. The K-Pop group showed their true personality at the airport, this is how the interpreters of ‘Butter’ behaved.

The members of BTS have always shown great gratitude to ARMY for all the support they have received, they also boast of a good education, because when the K-Pop group was preparing to travel to Las Vegas to perform at the Grammy Awards and their concerts , V showed his caring side.

Taehyung was wearing headphones that seemed to block out the noise a little, but not enough, since the idol noticed how they were talking to him and he took one away from his ear to listen carefully to what they were saying. On this occasion, Bangtan returned to show appreciation to ARMY for the reception.

BTS GREETS ARMY AFTER A WARM RECEPTION AT THE AIRPORT

After spending days away from home by the members of BTS, the group ended its activities in Las Vegas, after an unforgettable night at the Grammy Awards and four concert dates at the Allegiant Stadium, the interpreters of ‘Fire’ returned to South Korea.

On April 19, the K-Pop group was seen at the airport, after a warm welcome from ARMY, the members fully appreciated the support of their fans and showed it with nice greetings. Despite their exhaustion, each waved their hand.

After a wave of greetings and hearts made with his fingers, it is how Jungkook greeted his fans, the youngest made a series of bows to ARMY in the form of thanks for all the love that the public invests in the K-group Pop.

Despite the long journey and exhaustion, J-Hope greeted his fans by waving his hand in front of the cameras. This is how the members appreciated the presence of ARMY, although they were in a hurry, that did not prevent them from spending a few seconds with their fans. What do you think?

We hope that the K-Pop group has their well-deserved rest and can continue with their activities. We would like to continue seeing the love they dedicate to ARMY.

This was how BTS greeted their fans after the warm reception they received. Surely you missed RM, because the leader continues to do some things in the United States, when he finishes with those matters, he will return to South Korea, but for the moment the idol is still abroad.

Among other news, this is the ability that Lee Min Ho acquired in his drama Legend of The Blue Sea. He Continue reading.