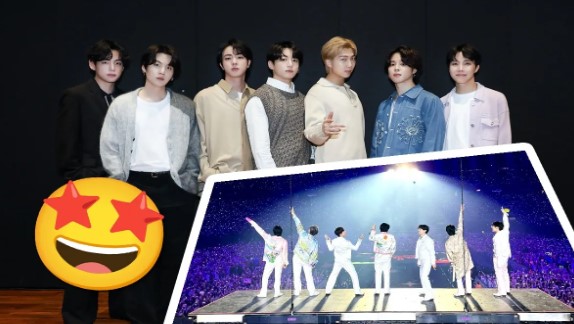 The BTS fandom is very diverse, this time the male audience, who saw the idols in Las Vegas, demonstrated their energy and great presence in the audience, surprising the band members.

There is no doubt that BTS is the most popular band at the moment, and to prove this, we have their powerful fandom, the ARMY is present everywhere, regardless of the country they are talking about, and are always ready to demonstrate their loyal support for idols. , whether it’s a return, an award, a vote and much more.

However, one of the most anticipated moments for BTS idols and their fans are concerts, and now that they are slowly returning, many wanted to be part of the audience that will see the band at the concert.

Las Vegas gathered thousands of fans over two weekends, but the idol shows were not only musical and fun, they also served to show that there are not only girls of small age in the ARMIE fandom, but also people. from different countries and ages, also has many boys in its ranks.

The idols said goodbye to Allegiant Stadium, but during the last show, the idols had fun communicating with the audience, so, noticing the presence of many guys in the hall, V organized a competition to see which of the ARMIES screams the most.

At first it was the turn of the group’s female fans, who shouted encouragingly after Taehyung’s signal, but when it came time to compare with the screams of the male audience, the sound rose much higher than expected.

In the concert clips, we can see that the band members made a great impression from the stage when they heard the voices of the ARMY that captured the hall, but also many visitors depicted the reaction of fans who were shouting loudly at that moment. .

On the other hand, we told you that BTS flew back to South Korea, but RM was not with them. Where is the leader of the group?

Plus belle la vie: Mouss on the verge of being killed!