Home Celebrity BTS Shows ‘The Last Supper’ in The New Photos For ‘MOTS: 7’ 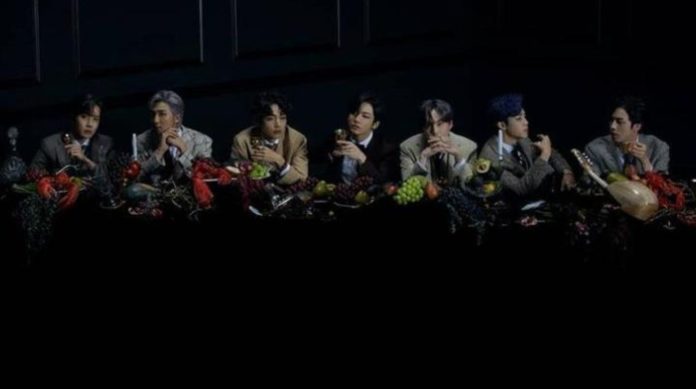 BTS Shows ‘The Last Supper’ in The New Photos For ‘MOTS: 7’. Bangtan’s musical return is getting closer, check all the details of these new conceptual photos.

BTS is about to make its comeback with the album ‘ Map of the Soul: 7 ‘, of which 3 tracks have been deployed that have been promoting during their stay in the United States, in programs and awards, ‘ Black Swan ‘, ‘ Shadow ‘and’ EGO ‘.

Through their social networks, the boys have published the photos of their third concept for ‘ MOTS: 7’ , BTS brings to its fans a variety of photoshoots , that even before officially leaving, the material is already breaking several records, such as the one of the pre-sale of the album .

In total there are 8 photos , one group and 7 individually.

Can flowers be a behavioral thread ? The scenery is black, fruits, such as grapes, pears and oranges take over the colors, you can also see the meat, as a nod to abundance.

Some details that can be noticed in the individual photos of this third version is that:

-Jin appears holding a piece of red pomegranate and is about to eat what looks like a grape or plum.

– Jimin holds a handkerchief, as if cleaning himself, a gesture that people make after eating.

– V is holding a golden cup and Jungkook has a cup.

– J-Hope, RM, Suga appear sitting with very strong looks, is it that the rap line is preparing something special in this comeback ?

The looks that Jin, Suga, J-Hope, RM, Jimin, V and Jungkook give to their fans, are very formal, with a tailor suit, of different patterns in pictures, ties, all sitting, do you remember anything? Well, maybe it’s a reference to ‘ the last supper ‘, remember that kids are very inspired by art , so it is not surprising that they allude to different works.

‘ The Last Supper ‘ is a painting by the artist Leonardo Da Vinci, which was first shown in Italy, in the year 1499 and is a representation of a biblical passage, where Jesus of Nazareth meets for the last time with his disciples to share wine and bread.

But it also reminds the song ‘ Dionysus ‘, which appeared on the previous album, ‘ Map of the Soul: Persona ‘ and Namjoon described it as ‘ the joy and pain of creating something ‘ and wrote it in reference to the Greek god of it name, which was distinguished by its excesses.

Snowdrop’s director did everything he could to get Jisoo in the...