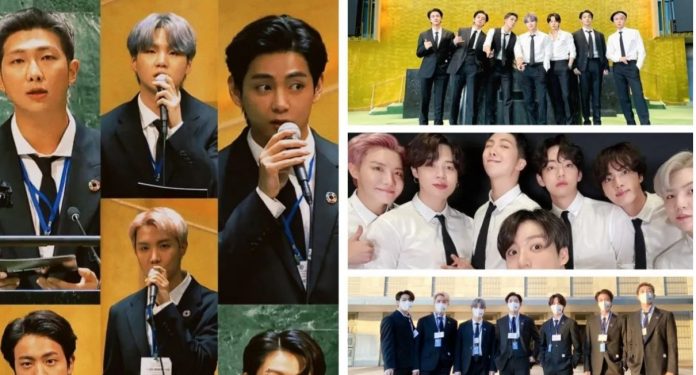 BTS idols let us see their concern for the world. The relevance of BTS today has led them to be South Korean ambassadors to organizations as important as the UN, as characters who are making history in their country, they give a message to the following generations.

The idols of BTS are boys who started in music with different dreams and goals, they have grown more and more and surely they have fulfilled achievements that perhaps they never imagined even when they were trainees ; Being ambassadors for your country is a very great honor and something that shows us another facet of the members of this K-Pop group .

Before the United Nations General Assembly , Bangtan Sonyeondan came to represent South Korea , the idols reflected on the current situation and thought about the future ; everyone is having a difficult time, it is true, but there is also a lot of hope and learning behind what the global contingency brought us.

The idols spoke to the generation of the future , from their experience since they have also gone through difficult situations but they have managed to overcome it and overcome any obstacle ; each gave a part of the speech in Korean after presenting their latest song ‘Permission to Dance’ which brings great joy and excitement to the audience.

What can we rescue from everything the idols said in their speech? Without a doubt, each word was key and important, but here we have the phrases that left their mark thanks to the Bangtan Boys before the UN.

The leader of BTS gave great words in his speech about all the good and bad of the current situation but that it has also led us to learn new things.

“We thought the world had stopped, but it keeps moving forward, I believe that every choice we make is the beginning of change, not the end; I hope that in this new nascent world, we can all welcome each other.”

RM in his speech

Jin participated with hopeful messages for BTS’s speech and also empathized with everyone.

“… Here we have people who shout: Let’s go on living! Let’s make the most of this moment (…) Instead of ‘last generation’, a more appropriate name would be ‘welcome generation’ because instead of fear of change, this generation welcomes and keeps moving forward. “

Jimin accepted that he also felt sad about the world situation, but also gave us some advice to keep moving forward.

For J-Hope it was important to highlight climate change and life on the planet we live on, but also about the decisions we make.

“The decisions we make when faced with change are important.”

Suga also gave encouraging messages for the audience and showed that it is time to look to the future with hope.

“The time for us to regret the things that were taken from us is the time to discover hope, precious in every moment (…) There will be choices that we make that may not be perfect, but that does not mean that we cannot do anything.”

Taehyung thought ahead and knows that a lot of people are scared of this one but he knows that we don’t have to see it in a negative way.

I hope that not only do we view the future as a bleak darkness, we have people who care about the world and seek the answers. ”

BTS gave great messages of hope and with Jungkook he was no exception, the idol but he used his speech to empathize with all those who have a difficult time.

“Sometimes the world seems stuck in place, even if you’re ready to go, it feels like you’ve lost your way – there was a time when we felt the same way.

What part of the speech did you like the most? Without a doubt, BTS motivated us to continue despite any obstacles as a bright future awaits us.