Home Celebrity BTS: RM congratulates V on his birthday in the cutest way 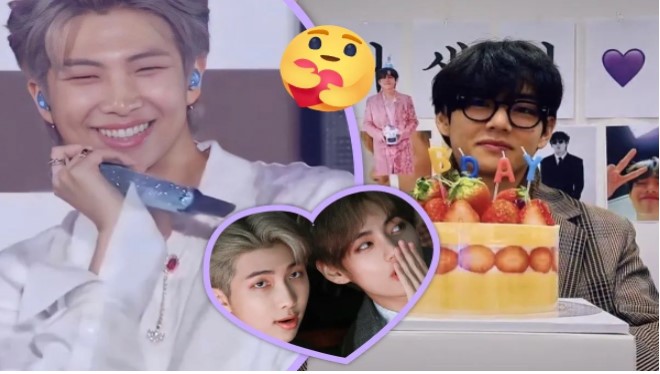 V is celebrating his birthday, the BTS idol does not lack love on this day and RM proves it with the most tender congratulations in the universe.

Like every December 30, BTS’s Taehyung is celebrating his anniversary, the joy spreads throughout the month thanks to ARMY and his different projects on behalf of Bangtan member Sonyeondan around the world; in addition to making it a trend with thousands of congratulations on Twitter.

This year is the 27th anniversary of V, in Korea and 26 in the rest of the world, and it is common to see the emotion of his fandom everywhere, not only because they are happy to have one of their favorite artists one more year, but also because the occasion is perfect to see beautiful interactions between the members of the group.

Although this year, the BTS leader shone with the special congratulations he gave to Taehyung, what did RM say to V in his big birthday message? ARMY’s heart totally melted as she read Namjoon’s words to the birthday boy.

Through the official Twitter account of BTS, RM published his birthday congratulations to Taehyung on this special day, the group leader wrote ‘My love’ for his partner celebrated by him and this completely melted the ARMY hearts.

‘My Love’ and ‘My Love’ are trending on Twitter thanks to this tender congratulatory tweet that BTS’s RM sent to his partner Taehyung on his birthday, awww!

OTHER BTS MEMBERS ALSO CONGRATULATE V ON HIS BIRTHDAY

Suga, J-Hope and Jimin also congratulated Tae on his birthday on Twitter and Instagram, with the most beautiful wishes and many photos of the idol, they congratulate him on this special day for him.

Suga just chose to leave a nice message for Tae:

This is how this celebration has been for V, but it doesn’t stop there, because ARMY did the best projects for the idol’s birthday and everyone has been filled with the idol.

XXXTentacion: the car in which he was killed is exhibited in...