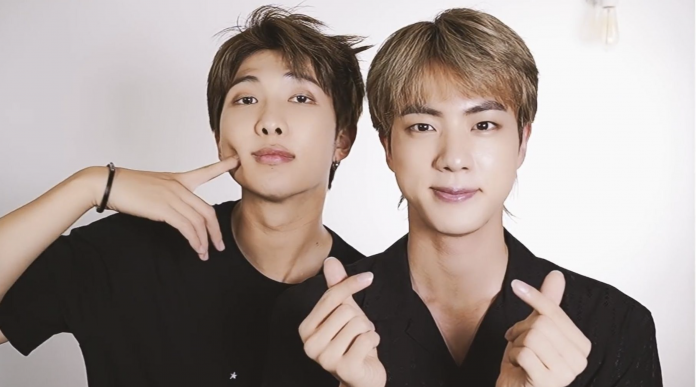 Jin, Suga, J-Hope, RM, Jimin, V and Jungkook have more and more hits. And some of them are entirely in English, and no longer in Korean, for example Dynamite. Except that the members of BTS are not fans of singing totally in a language other than their own. RM and Jin who are part of the K-Pop group opened up about this. So will they sing in English again or only release Korean singles?

BTS: RM didn’t want to sing in English at first

The Bangtan Boys, better known as BTS, didn’t want to sing in English when they started out. And they might even stop making hits in English, preferring to sing in their native language: Korean. However, Jin, Suga, J-Hope, RM, Jimin, V and Jungkook hit the mark with their songs entirely in English! First with Dynamite, which broke a record and took them first in the American Billboard ranking. Then with the singles Butter (which broke a record on YouTube) and Permission to Dance. So why stop English and go back to Korean?

The K-Pop group from South Korea spoke about this in Billboard magazine. “They didn’t all agree that English was a good idea,” the outlet wrote. “RM was not too keen on the idea, although he acknowledges it was a crucial way to keep the buzz going during the pandemic,” Billboard said, “There was no alternative” added RM. The singer who is part of BTS clarified, “I don’t think we can ever join the mainstream of American pop music, and neither do I. Our ultimate goal is to do a huge tour of the stadiums there. But that’s it. ”

And RM isn’t the only BTS member who doesn’t enjoy singing songs entirely in English. Jin confessed that singing in English seemed “totally unnatural” to him at first. To learn how to pronounce the words well in English, he even explained that he wrote the pronunciations of the guide track in Korean characters. “The English I learned in class was so different from the English in song,” Jin said, “I had to erase everything in my head first.”

Already in 2019, BTS, which released a collab with FILA, revealed to Entertainment Weekly: “We don’t want to change our identity or our authenticity to get a number 1. If we suddenly start singing entirely in English, and change other things, then it wouldn’t be BTS anymore. ”

At the end of July 2021, President Moon Jae-in appointed BTS the President’s Special Envoy for Future Generations and Culture. Since then, Jin, Suga, J-Hope, RM, Jimin, V and Jungkook even have diplomatic passports. “We expect BTS to contribute greatly to enhancing the prestige of our country as a leading nation in the post-Covid era,” the president’s office also said in a press release. Suddenly, South Korea sees BTS artists as ambassadors for the country and the language (besides, you can learn Korean thanks to BTS and a web series).

But Shin Young-Jae, president of the Big Hit Entertainment label (now Hybe), wouldn’t want BTS to abandon English in their songs. For him, singing in English is “a proof of their strength, of the way in which they can reach an amicable resolution and take into consideration the needs of society”. And probably also a way to earn more money.