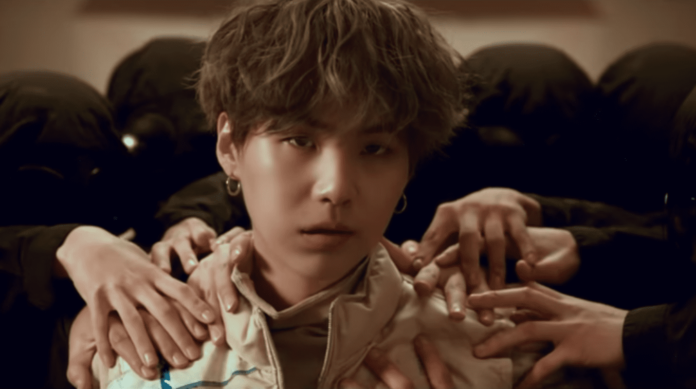 BTS is back! The first phase of the ‘Map Of The Soul: 7’ release schedule has officially begun with the premiere of the trailer for its comeback. The video for ‘Interlude: Shadow’ is here and the wig has already flown more than one. What does the intro of the new BTS album mean?

‘Interlude: Shadow’ is in charge of Suga. After the release of ‘The Most Beautiful Moment In Life’, this is the first time that the introduction of a BTS album has been performed by Yoongi again and is simply amazing.

This song reveals that BTS has a new musical concept, ‘Interlude: Shadow’ makes a perfect contrast with ‘Map Of The Soul: PERSON’ and at the same time refers to the fame that the boys have achieved so far. In the video we can see Suga escaping from something and then get to position herself on a high platform and start singing for many spectators.

Several references to ‘O! RUL8,2?’ Can also be observed throughout the video. and the message of ‘Interlude: Shadow’ could be focused on how idols are always being watched. At some point, Suga is touched by people who tried to break a door to get to him, but that does not stop him from stopping rapping.

The video ends with Yoongi caught among thousands of paparazzi, who take pictures at the same time.

“I want everything to be mine. I want to become the king. I want to go win.”

‘Map Of The Soul: Shadow’ has been cataloged as a Rock & Pop album, so this could be a great spoiler about what we can expect from the new BTS songs. There is no doubt that the boys have returned with more force than ever.

The intensity of the new song and the depth of its lyrics has only filled the ARMY with excitement and raised expectations about ‘Map Of The Soul: 7’.

What did you think of the BTS comeback trailer? Leave your comment.