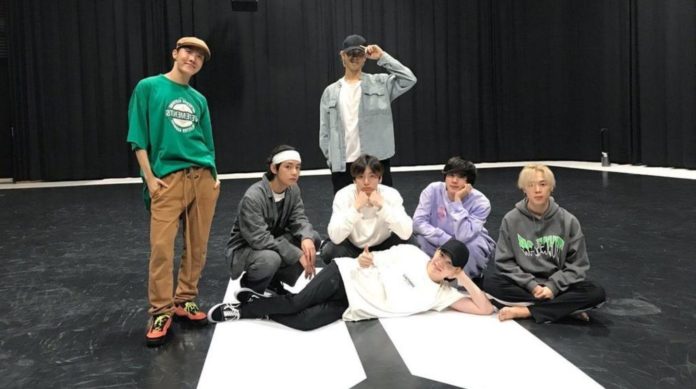 BTS reveals Dance Practice of ‘ON’. The evolution of capabilities was demonstrated with this clip.

The Big Hit Entertainment group released 4 days ago the first version of the video of ‘ON’ , the promotional single from Map of the Soul: 7, the video has already reached 85 million views with the help of its powerful fandom around the world , but ‘ON’ continues to surprise ARMY.

After also seeing the presentation of the guys in Grand Central Terminal who performed for Jimmy Fallon’s Tonight Show , a new version for the video collection with this song and its incredible choreography has now been released.

This is the Dance Practice video , which takes us to a rehearsal room with the logo of the group stamped on the floor, the same place where they rehearsed for presentation at the GRAMMYs and Black Swan . The boys, surrounded by a large number of dancers who accompany them in this performance, interpret the choreography of ‘ON’ , having been recorded using a plane with less movement, this video allows us to more accurately appreciate the dynamics that Jin, Jimin , Jungkook, RM, J-Hope, Suga and V continue while their vocal lines appear.

We see the dancers distribute themselves as they act as different contingents and interact with the boys, who once again demonstrated their broad capacities for interpretation through dance .

The video clip that has been shared through the official YouTube account BANGTANTV, shows a powerful and full of energy choreography that has been recognized by all the followers of the group, who have expressed their joy at the release of this clip.

See Also
THE MOST EMOTIONAL MOMENTS OF BTS

Will Smith: His Wife and Ex Swap Christmas Recipes!

Justin Bieber shows up in full hockey training on Instagram!