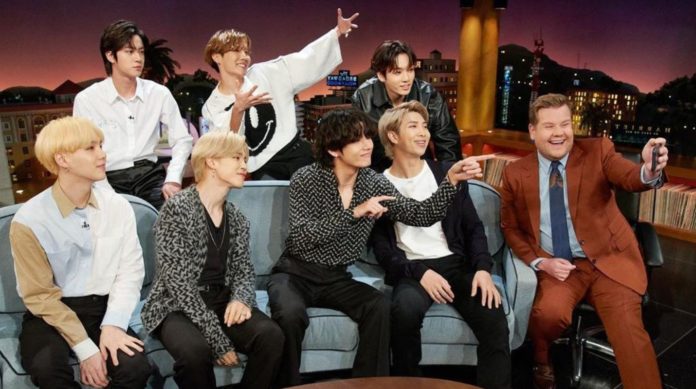 The BTS guys starred in an unforgettable moment with Ashton Kutcher and James Corden, look what it is!

ARMY ! BTS continues its agenda for the United States, after the Grammy and the event on iHeartRadio , the boys surprised on ” The Late Late Show ” with James Corden .

His participation in the program was one of the most anticipated, as part of his promotion for ” Map of the Soul: 7 ” made the premiere of ” Black Swan ” and had extra fun, we tell you everything that happened.

BTS showed that this new era has a much more artistic and dark aura. The group premiered ” Black Swan “, but they also played hide and seek . ????

Ashton Kutcher was one of the guests to the peograma and James Corden organized a game of hide and seek between the boys and the two of them. LOL

Each of the members managed to find the best hiding place , some were caught very quickly, others tried to hide but failed. Awwww!

In the end, J-Hope was not found. RM cheated and betrayed Jungkook , who pretended to be a cameraman and although they passed him, they didn’t recognize him. BTS is at its best stage and they have enjoyed their stay in the USA.

The tallest idols in the K-pop industry