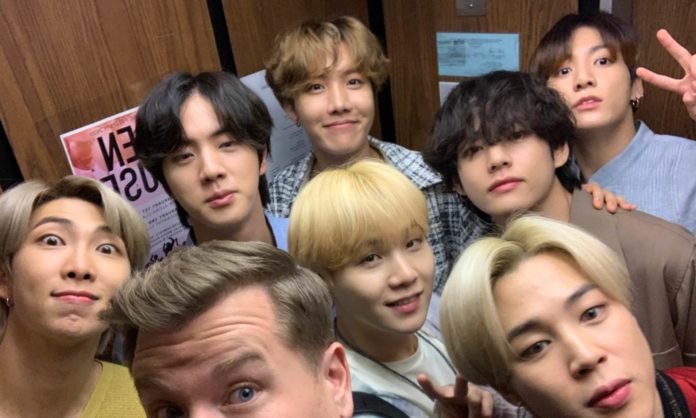 BTS performs at HomeFest with James Corden and shares spacial message. This show had one of the most intimate shows, and the Big Hit boys did not hesitate to use this closeness to reach their followers.

In this special program of ‘ The Late Late Show with James Corden ‘ he has adapted to the changes that have been usefully presented due to COVID-19, one of the mechanisms that have been implemented by different governments around the world, so that people do not have contact with crowds and decrease in the risk of contagion.

James Corden drove from the garage of his house with only a few cameras, with special guests , who communicated through different digital platforms and the boys of BTS could not miss the call #HomeFest , which seeks’ to be all together in this, tonight is about bringing people together to keep them separate . ‘

From what seems to be one of their rehearsal rooms, the members of BTS did a different performance , but with the same energy, the boys wore comfortable clothes, less production, but the same affection they put into their performances gave them to the ‘ Boy with Luv ‘ viewers .

In a more direct and entertaining conversation with James Corden , the members of BTS sent a message to their fans , who know the situation the world is going through, thanking them for being a means by which they connect with the public.

V sent a loving message to his fans :

“ARMY , are you okay ?, we really miss you so much and we want to see you as soon as possible”

“It is quite a difficult time for everyone in the world together now. But we see that people show solidarity, consideration and mutual support, that’s very good”