Home Celebrity BTS AND ‘PARASITE’, THE PERFECT MATCH OF SUCCESS 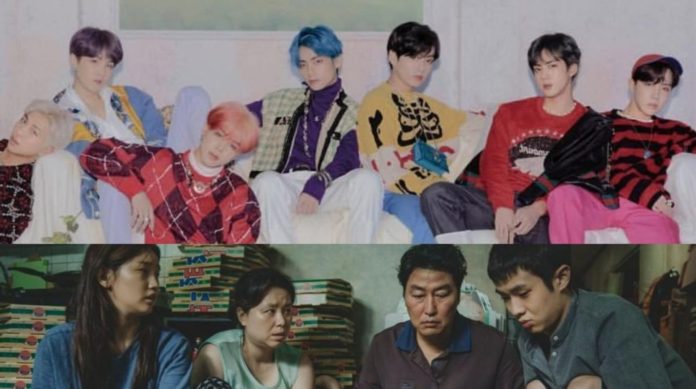 The Korean fandom was glad for V’s friendship with one of the film’s actors.

“Parasite” has become the most successful Korean film in the country, the story that tells the drama of a poor family and makes a stark criticism of the difference between Korean social classes, has earned credit for recognized awards such as the Golden Globes and the SAG.

Like BTS, the film has gained international success and recognition and ARMY was surprised by Taehyung’s close friendship with Choi Wooshik, one of the cast members.

Through social networks, V shared a couple of videos to congratulate his friend, who won a “Best Cast” award at the SAG 2020 (Actors Guild) awards. The idol took a walk next to Wooshik, they sat on a bench and ate hamburgers. Fate had prepared success for both artists.

“Parasite” and BTS are the example of the perfect match of Korean success. The film has positioned itself as the first story in that language to win international awards. The boys have also won awards by being the first K-pop artists to succeed in US ceremonies.

ARMY is happy that V can see his friends succeed and although they are different arts, “Pasarite” represents the growth of Korean cinema and BTS is one of the most popular K-pop bands.