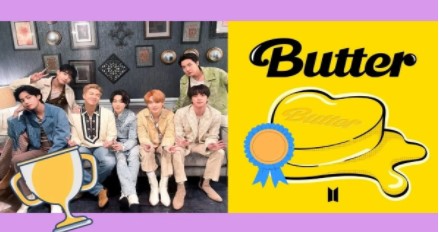 Months after its release, BTS’s Butter is still in the memory and on the ARMY playlist, but it is also present at the most important awards shows in the industry, such as the Variety Hitmakers.

This 2021, the K-Pop band BTS made their fans dance and forget their worries with the English single Butter, a song they released in the midst of the global health crisis and that has a funny message.

Within months of its world premiere, the song has received many accolades, ranking at the top of YouTube music trends, earning a 2022 GRAMMY nomination, and now boasting a new award from the Variety Hitmakers.

On December 4, the delivery of the Variety Hitmakers was held, a ceremony that paid a well-deserved tribute to figures from all fields of entertainment such as television, radio, cinema and of course, music.

BTS was named for the Record of the Year with Butter, one of the band’s songs that was the sensation during 2021 and promises to give us more surprises in the coming months, as it is nominated for Best Pop Group / Duo Performance at the GRAMMY Awards. 2022.

Because the boys were unable to attend the Variety Hitmakers gala, they sent out an emotional thank you salute where they also gave a speech and discussed Butter’s mission.

The Big Hit singers and rappers thanked them for Variety magazine’s honor of being Record of the Year with Butter, explaining that during uncertain and turbulent times they stopped to look back for a moment and released their song in hopes of lifting the cheer up.

We just finished our concert in person (Permission To Dance On Stage In LA) that we were waiting for, it feels like the beginning of a new chapter.

We wanted to share positive and fun energy, that’s Butter for BTS.