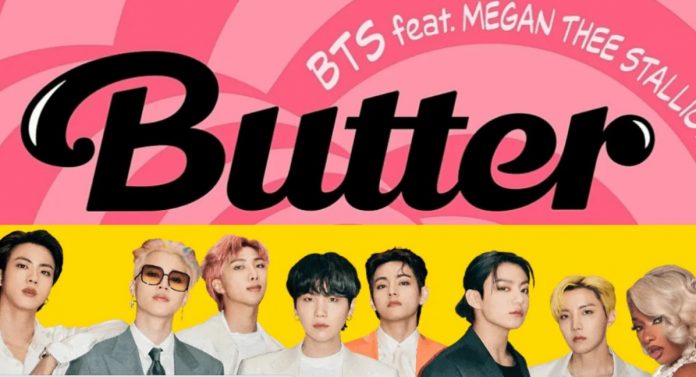 K-pop boy band BTS and rapper Megan Thee Stallion pooled their talents in the latest remix of Butter. ARMY’s excitement was featured at the world premiere of BTS’s Butter remix in collaboration with Megan Thee Stallion, the song achieving impressive numbers in its early hours. What did you like most about the hit?

It has long been speculated on the remix of Butter of BTS with Megan Thee Stallion, the first collaboration of the idols of the K-pop with US rapper became a reality this 26 August, as revealed the official audio of the new version of the theme English.

Through the YouTube platform, the remix of Butter was published with the characteristic happy and party vibe of the single, now the voice and powerful rap of Megan Thee Stallion were added.

Since it was a highly anticipated release by Internet users, fandoms of the Big Hit group, and the Body interpreter, 6 hours after its premiere the video accumulated more than 9.7 million views, the fans worked so hard that after 11 hours they registered 11 million views.

BTS AND MEGAN THEE STALLION RELEASED THE REMIX OF BUTTER, WHAT WERE THE OPINIONS?

As with every Bangtan Sonyeondan activity, ARMY joined the conversation about the group’s remix with the hashtags #BUTTERTHEEREMIX and #BUTTERTHEEREMIXToday, where they shared their first impressions of the epic collaboration.

For some of the netizens, their favorite feature of the new version of Butter by BTS and Megan Thee Stallion was the daring, fun, and Hip Hop touch that the female star added, for others, the combination of the musical skills of Korean artists and rappers strongly arrowed his heart. What became your favorite part of the song?

As smooth as the car I drive, not even the best party planner will feel this vibe. The boss and I make the haters keep quiet.

What cannot be denied is the vision of the GRAMMY nominees and Megan Jovon Ruth Pete on the new version of Butter, as they put a fresh spin on a song that already had it all and exceeded the expectations of ARMY.

Resident Evil 8 Village; All The Treasures of The Village of...