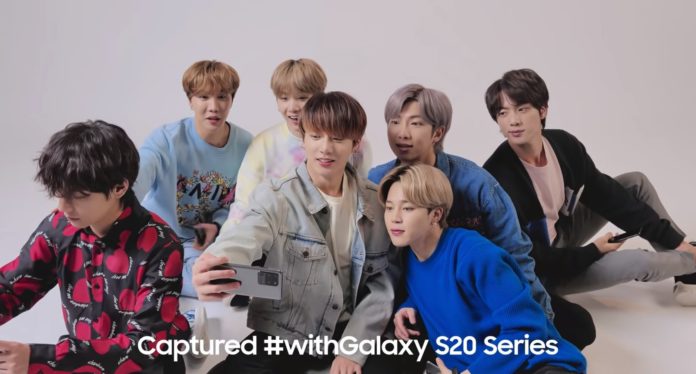 The k-pop group BTS helped the Galaxy S20 win the most popular cellphone title of March. The launch of the line amid a pandemic of the new coronavirus ran into difficulties such as the sale of smartphones in some markets. With that in mind, Samsung has established a partnership with members of the South Korean group.

According to a survey by the Big Data Research Institute, the move raised the popularity of the Galaxy S20 family in order to place the South Korean giant in the Smartphone Brand Reputation Ranking in March.

Samsung has a history of partnering with Korean pop groups to achieve the massive reach they can provide, as it did with the band Blackpink in the launch of the Galaxy A80. Operating in this same line, BTS, which has a large number of followers around the world, was selected to publicize the new model.

In addition, the project still connects the company to a younger group, since they are the majority in the band’s fan base. As a two-way street, the brand started the process by supporting the global contemporary art initiative of the South Korean group called Connect BTS.

The survey took into account numbers collected from 12 online sales channels, and found that the Galaxy S20 achieved a popularity of 53.18% (these figures were calculated based on opinions collected in South Korea). Cell phones like iPhone 11 and LG V50s ThinQ were in second and third place, with 41.12% and 5.68%, respectively.

The announcement of the Galaxy S20 with member Jimin has already had great repercussion, adding 375,000 views on YouTube. The company’s other ads with V and Jungkook broke the record, accounting for numbers between 850 and 870,000 views.

The Galaxy S20 arrived in Brazil for the suggested price of R $ 5,499. Other versions, such as the Galaxy S20 Plus and the Galaxy S20 Ultra are sold for figures starting at R $ 5,999 and R $ 7,999, respectively. The technical sheet includes the latest generation Exynos 990 processor, batteries ranging from 4,000 to 5,000 mAh, and the latest Android 10 system from Google. The highlight is the Ultra version that features a photographic set of up to 108 MP with zoom up to 100x.

The Covid-19 pandemic caused Samsung to take new strategies. The South Korean company decided to bring the units for launching the brand by two weeks. The measure aims to follow the authorities’ recommendations regarding restrictions to curb the spread of the disease. Consumers will also be able to pick up the devices at the brand’s physical stores.