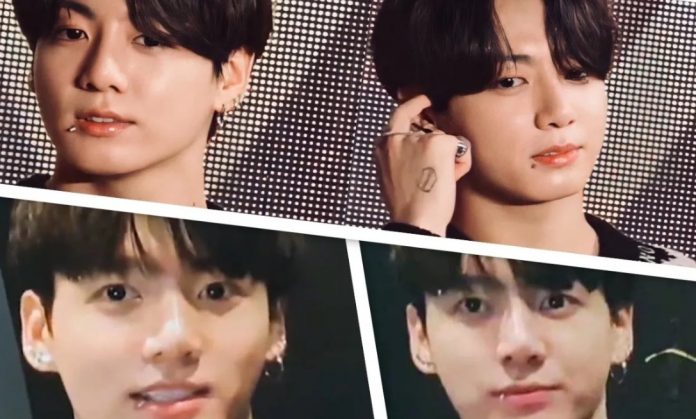 Jeon Jungkook is not only expressed through music , the idol is also an excellent artist , art is very good at him and he has shown it to ARMY ; painting and drawing talents are born in the maknae of BTS and has a hobby pursue this discipline.

But also, Jungkook has shown that his own body is a great form of expression , in it he has put a lot of himself that he wants to show the world, like his great love for ARMY, for example; with tattoos captured on his skin that his fans love and that have an important meaning for him.

The style of JK is original and is designed by the own artist , besides having incredible tattoos we’ve seen adding new accessories to your image and now has perforations that looks safely and give you something fresh to the look of this great singer Bangtan Sonyeondan .

ARE JUNGKOOK’S PIERCINGS REAL? BTS IDOL ADDS A NEW PIERCING TO HIS IMAGE

A few months ago, we saw that BTS’s Jungkook had gotten an eyebrow piercing , at first it was thought that it was just a sticker, but later it was confirmed that it was real and the idol was wearing it for sure; a few days ago, the Bangtan Boys performed at TMA 2021 where ARMY noticed that Kookie had a new piercing .

And yes, it is real , Jungkook has a new lip piercing and it is totally true , we could see it today during Jimin’s birthday VLive and JK changed the little earring that he had previously, for a ring in his lip ; the idol’s piercings are real and they look amazing on him.

jungkook changed his lip piercing from a stud to a ring!!! pic.twitter.com/aR3SnetJXs

HOW MANY PIERCINGS DOES BTS’S JUNGKOOK HAVE?

Now, BTS’s Jungkook has a total of 2 piercings , one on his eyebrow and his new piercing on his lip ; With this, the Golden Maknae has also achieved a better acceptance of these accessories and tattoos, leaving prejudices and bad comments for them behind.

Jungkook looks excellent and if you like this type of accessories, it is good that he can wear them safely and likes to see himself in the mirror, ARMY also loves to see his idol like that and supports him; JK has a phenomenal style.

The Witcher Season 3: They filter names and details of new...