Home Celebrity BTS: Jin’s Super Tuna goes viral, will he have his own challenge? 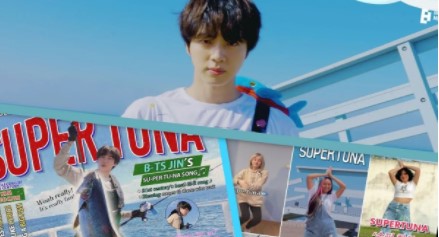 To celebrate his birthday, Jin released ‘Super Tuna, a special song that shows us one of his hobbies with a fun song that is already becoming a trend in different countries and ARMY does not think twice when it comes to turning it into a challenge.

Jin’s birthday was full of surprises and not only from BTS fans who created a lot of projects in his name to celebrate the idol and filled the streets of various countries around the world with the face of this Bangtan Sonyeondan member.

Also Seokjin wanted to show more of himself on his anniversary and released a very funny and special song, ARMY was surprised when he found ‘Super Tuna’, a composition that Jin wrote inspired by one of his greatest hobbies, fishing.

With a video filmed in the sea, Jin put his best dance steps for ‘Super Tuna’, quickly the choreography video of him began to accumulate millions of views, as the idol’s fans did not stop listening to his new special song .

The popularity of ‘Super Tuna’ has grown in just one day and is already going viral in different countries of the world, will you have your own dance challenge? ARMY is preparing and showing a perfect dance cover of this song by Jin.

Jin’s ‘Super Tuna’ went viral in China, the social networks Weibo and Billibilli have been filled with the video of the track with thousands of people asking about the handsome and tender man who plays it, no one can stop seeing the Worldwide Handsome of BTS with their cute song and fun choreography.

The best thing is that it all came from the creative head of Seokjin, the idol confessed on VLive that they gave him a very difficult choreography, but when he went to Six Flags in the United States and then to the beach, he only thought of making the video of dance there <3.

Super Tuna is about to reach 10 million views on YouTube, Jin’s funny fishing-themed song is a hit on the first day of its premiere alone.

WILL JIN’S SUPER TUNA BE A DANCE CHALLENGE?

ARMY predicts that very soon everyone will start dancing to ‘Super Tuna’ and share the video on social networks, this because the song is super catchy and the dance is not that difficult to do, plus it is quite fun.

Although that was not the purpose of Jin, LOL, and he already posted on Weverse not to make it a challenge, but … Maybe his fans can’t help it.

No but, please don’t do a challenge for ‘Super Tuna’ that I didn’t even plan. No, I’m so embarrassed.

Definitely, ‘Super Tuna’ is a super fun song, ARMY won’t stop listening to it and new Jin fans join together to sing and dance to this incredible composition that was born out of the idol’s love of fishing.

In other news from Jin from BTS, on his VLive we got to see his wife, what? He is married? This is how the idol reacted when he found out.

Niall Horan criticizes the media for profit with celebrities