Home Celebrity BTS: Jimin showed his professionalism by falling during PTD on Stage 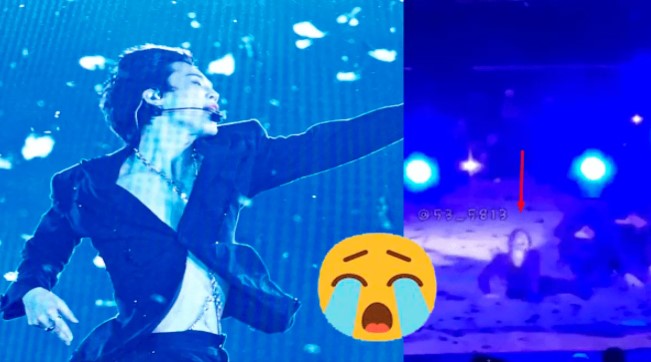 Bangtan Sonyeondan had their second performance in South Korea. Once again, they gave everything on stage and ARMY enjoyed each of the songs with encouragement despite the rain. However, with the stage being wet, Jimin couldn’t help but fall during a performance.

During day 2 of Permission to Dance on Stage in Seoul, BTS’s Jimin suffered a slight fall while dancing. That was not an impediment in his presentation, as he showed his professionalism by resuming the choreography instantly.

BTS always shows their fans how to move on. From the workplace to the personal sphere. For that reason, even if they make mistakes in their performances, they never stop dead because “the show must go on”.

And Jimin perfectly represented that phrase. Well, after slipping on stage, he did not hesitate to follow the presentation.

The second night of the BTS concert in Seoul was raining. So the stage was wet and slippery. It was during the presentation of Black Swan, in one of Jimin’s solos, that as he advanced towards the front he could not help but slip and fall to the ground in a resounding way.

Landing on his back, the acclaimed dancer managed to incorporate the fall into his choreography. Improvising, he made a neck movement trying to make it agree with the song and soon got up to resume the steps of the original choreography.

ARMY was proud of Jimin’s professionalism as he adjusted the choreography so easily and continued with the performance. However, she couldn’t help but feel concerned for the boy’s well-being.

Although no statements have been made as to whether he was seriously injured in the fall. ARMY wishes that the dancer is well and does not suffer from discomfort later.

Miguel Herrán: worries his fans with a message!

KJ Apa responds to criticism of his stance on Black Lives...