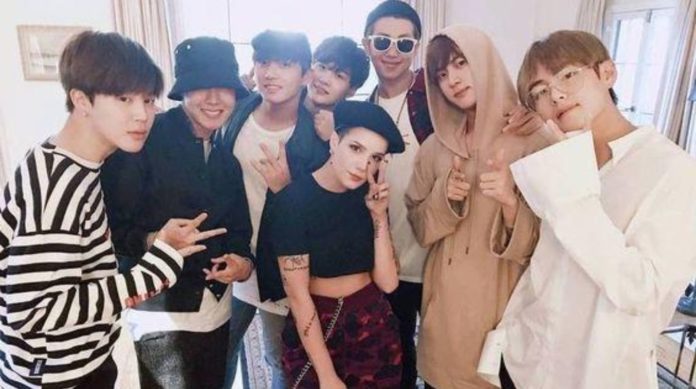 The support among these great music personalities show that they have a goals relationship.

Yes BTS has a great relationship among singers in the United States, the first on the list would be the successful composer Halsey, with whom her first work together was ‘Boy with Luv’, which belongs to her album ‘Map of the Soul: Persona’ , with that record material the group grew in popularity and sales, breaking records.

The BTS boys promoted ‘Boy with Luv’ in different shows in the United States and made a very successful tour, where Halsey appeared during a surprise concert in Paris.

The boys and Halsey have formed a great friendship, this is how the singer invited Suga to participate in her album ‘Manic’, where fans can enjoy suga in the song ‘SUGA’s Interlude’:

In my heart live the hate and arrogance that I feel for myself, I grew up full of dreams and fulfilled them.

This song talks about the dreams that a person has and in the course of his life how they can change. Halsey and Suga got along very well, fans at the announcement of the collaboration were intrigued about these two stars were going to provide on the collaboration track and the result left many very happy.

Through social networks, Halsey has had many interactions with BTS, she has uploaded to her Instagram stories and on other platforms her support for other projects that the boys have, such as the next comeback with ‘Map of the Soul: Persona’ , the singer published a screenshot of the track ‘Black Swan’ with the following message:

It’s the day of the album release! I’m preparing for my show tonight, meanwhile. You have surpassed boys.

And now that her album ‘Manic’ has come out in physical format, fans have realized that within the thanks Halsey has given credits to Suga for his work in his record material, with the name of Yoongi.