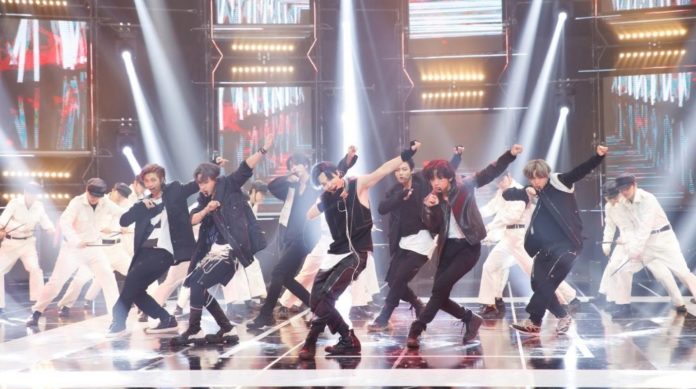 BTS gets their first win with ‘ON’ in Music Bank. The idols are very grateful to ARMY because of the support they have provided in their comeback.

BTS continues with the promotions of its new album ‘ Map of the Soul: 7 ‘, this has been a busy week for idols since they were present at M! Countdown and their special episodes were also aired on ‘ The Tonight Show starring Jimmy Fallon ‘ and ‘ Carpool Karaoke ‘ from ‘ The Late Late Show ‘.

Tonight he performed at the KBS Music Bank program , where not only had two wonderful presentations of his most recent songs, they also managed to be crowned as the winners of the night. We tell you everything that happened.

why do they look so good?? My bias is changing so much right now #방탄소년단 #bts #on #kenetic #manifesto

Several hours ago, the BTS guys were present totally live in the new edition of Music Bank , of the KBS television network . The idols began this great night by presenting two of their new songs from their album ‘ Map of the Soul: 7 ‘; it was ‘ Black Swan ‘ and ‘ ON ‘.

When presenting ‘ Black Swan ‘, the idols appeared dressed completely in black, with elegant costumes and with the peculiarity that this time the choreography did not interpret it barefoot. Watch it now:

For ‘ ON ‘, Jin , J-hope , Suga , RM , Jungkook , Jimin and Taehyung changed outfits and appeared in garments in tones similar to those they used in the official video of the song, which was released yesterday . BTS was accompanied by a large number of dancers and V again stole ARMY’s heart by appearing again with her neck tattoo.

Later, the time came that everyone expected: the revelation of the winner of the night. BTS faced ZICO and finally took their first win home when they received a score of 9785. The idols celebrated and RM gave a sweet message to ARMY in gratitude for their unconditional support:

“ARMY, are you looking at us? Even if you are not facing us now, we believe we win for your support. It is the first time in years, almost a year, that we won in a musical program, we are very happy and I want to tell you that I love you.”

Suga joined RM and assured that if ARMY is not with them, everything would be very different and sad.

BTS AND ‘PARASITE’, THE PERFECT MATCH OF SUCCESS