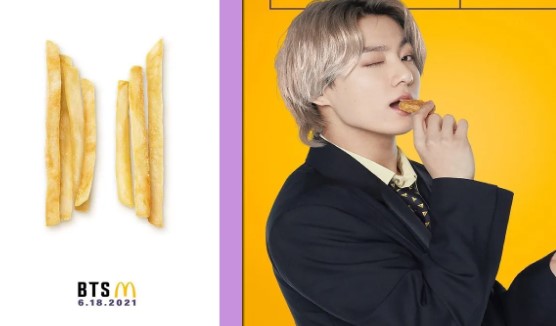 If you couldn’t buy The BTS Meal or just wanted to relive this experience, then this is for you. McDonald’s has hinted that the combo created for ARMY may return to stores.

Among the many projects that the Butter performers implemented last year, the launch of The BTS Meal was undoubtedly remembered, when the idols teamed up with McDonald’s, and the result was amazing, and they managed to fill their restaurants with fans of the group. k-pop.

First of all, let’s remember what is The BTS Meal? This is a special menu chosen by the members of the idol group, which was sold all over the world for a short season, including sauces with traditional Korean flavors and purple packaging for ARMI.

A year after the announcement of this set of products, McDonald’s is again delighting fans with the possibility of returning the menu. What tips attracted the attention of the fandom?

BTS AND MCDONALD’S THRILL WITH POSSIBLE RETURN OF ARMY MENU

Recently, a mysterious tweet appeared on the social networks of a fast food restaurant, which said: “Return ___”. This has led to many consumers responding with a dish they would like to buy again, but which is not currently on the menu.

Thus, several ARMY commented on the alternatives related to BTS, but the response, which included the amount of BTS Meal, all the merch released together with idols, sauces with South Korean flavors and even photo cards, attracted attention.

The official McDonald’s account noticed this message and replied what the result of the sum was, receiving only emoticons in the form of purple hearts.

WILL THERE BE A BTS LUNCH MENU?

Although McDonald’s response has raised suspicions that the dish or menu they plan to bring back is The BTS Meal, it hasn’t actually been announced yet, so everything remains a rumor.

In case of confirmation, there is a possibility that a new menu will be presented, as well as what we already knew before will be resumed.

We also inform you that BTS will arrive at FIFA hand in hand with Hyundai, find out which project will make this possible.