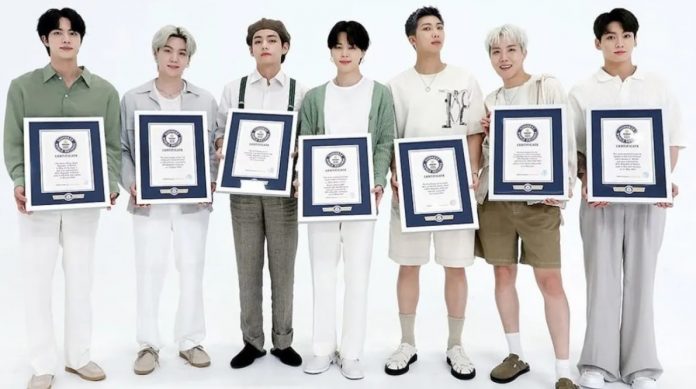 BTS has set so many records so they have earned a special place in Guinness. Throughout the music industry, BTS has become a gigantic band in many ways and ways, the K-Pop group has achieved unimaginable records so the Guinness Book of Records urges it.

The history of music has been forged on a larger and smaller scale thanks to each artist or band that has put their work into this art, in modern times BTS is making history for the future; there will be those who remember their passage through the world thanks to all that they are achieving today.

The popularity and size of Bangtan Sonyeondan have made the band recognized around the world, having fans who love, support and admire them without limits; ARMY and BTS, as a team, are achieving more and more dreams and reaching goals that no one imagined. This is what has made Bangtan break so many records and leave a very big mark in history

The Bangtan Boys already have some Guinness Records that have made them a band with a certain status and class, not everyone reaches this very important book and this time, they have gone to the next level because they have earned a special space in the book.

With a total of 23 Guinness Records , BTS has earned a place in the Hall of Fame for this important book that collects all world records , this year, the K-Pop band has broken more records both in music, as in social networks or digitally and this has earned them great recognition .

Bangtan will always be remembered thanks to these incredible achievements, really something that leaves a mark and makes history for both music and K-Pop, all the successes that the band has achieved are also thanks to their fans.

And in other BTS news , Jimin will be in heaven with a very special ARMY project, he will be in the clouds and you won’t be able to stop watching.