Home Celebrity BTS, the disturbing theories of the official video of ‘ON’ 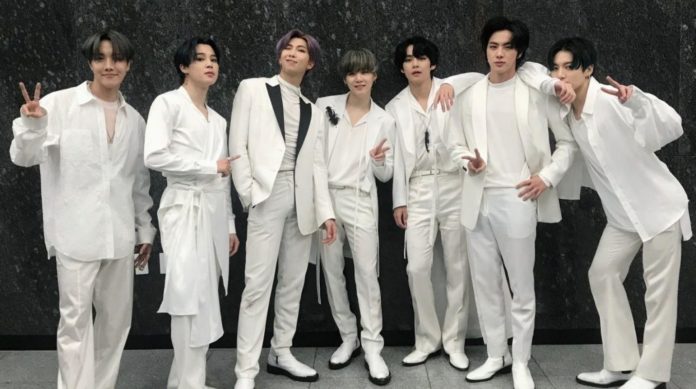 BTS, the disturbing theories of the official video of ‘ON’. The boys show their musical transformation with the official clip and incidentally they will confuse your head even more!

BTS premiere its long-awaited official video of ‘ON’ , which already has more than 14 million views on the official Big Hit Labels channel on YouTube, the director of the video was Yongseok Choi, who was inspired by medieval passages to give him a shocking story .

We will explore the possible stories that are intertwined and we will explain some theories that would explain the plot of the ‘ ON ‘ clip , since ARMY is accustomed to creating in its own imagination the argument of what is happening in the different works of the Bangtan Boys

Are you still impacted with the MV of ‘ ON ‘?, Then check these theories that will leave you with more questions than answers.

Check them all and share which one is favorite.

‘Make It Right’
The connection of this song that was dedicated to ARMY .

During the ‘ Make It Right ‘ video where don animated characters interact , apparently they would be V and ARMY , who would protect eternally, despite the danger, so during the most tense moments, even if San is given that they are the light of his fans.

The girl the video of ‘ ON ‘ which is with V serious ARMY , where V is protecting , why would blindfolded because Tae would ensure that not see anything wrong, as a protection from the evil world and cruel in which The earth is becoming.

That is why it would be an explanation of why V also removes the blindfold when the heaviest moments have passed, the video of ‘ MIR ‘ would be like the character fights with a dragon, the setting of ‘ ON ‘ seems a mythical place or mythological.

Biblical References
Namjoon makes apology to Noah’s ark, in which the end of the world is told and were not available to save a pair of each spice in his ark, because the flood threatened to end life on earth.

Jungkook would be the bearer of sin with the thorns and as a treaty to flee from them through the search for peace, Jin is the one who bears peace, represented in peace, but the debate of letting go of the animal or not is what consumes it most .

Suga represents a priest, who would have the truth and strength to deliberate what is right and wrong, the rapper would be the representation of wisdom,

J-Hope appears in the video next to a crow, taking care of Jungkook’s body , which is the symbol of the souls of the damned, Jimin would be the intermediate of heaven and earth, it is said that those who can play the drums, It is because they have great knowledge, as it appears in the video, where the singer is surrounded by them and a child, who would be his disciple.

Namjoon would be the person in charge of taking them to the end of the road, long, as well as a guide in the gloom, when he opens the wall is another reference to when Moses opens the waters of the Red Sea.

Jungkook, is he dead?
Jin throughout the video says with nostalgia to a dove, which is captive in a cage, would be the representation of Jungkook in life, on the earth plane.

Meanwhile Jungkook is in limbo, a place, which according to the Christian religion is where a juic will be made to know if the soul of the dead will be eternally inhabiting heaven or infirm, the idol tries to escape from this, which would be the wall of the one who runs, but cannot, since his destiny is inevitable.

Jimin and J-hope would be the judges of their attitudes, shows Suga is the image of the church in the video of ‘ ON ‘, V is the one who waits patiently for JK’s soul to find peace and try to help those most in need .

RM would have the role of guiding the other boys who are on earth, but, although Jungkook does not want to leave the earthly plane, the boys realize that their own wall is created by themselves, by not letting Jungkook go in peace , is when Jin releases the dove, everyone opens the wall obtaining the inner peace of the boys and the deceased.

So the other members join Jungkook to his ancestry to heaven to rest and they will stay on earth to fulfill their dreams.

Jungkook’s thorns
The wives of thorns was a punishment given to thieves.

Jungkook would have to go through suffering and criticism to become the teenage angel who plays the trumpet so that the final judgment begins, however, this theory also points to Jungkook is no longer alive.

And J-Hope would be his companion during this path, his night watchman or the guide that would direct him, due to the thorns on his hands is that Jungkook would experience terrible pain, both physical and spiritual, aimed at him understanding that life is not only Good or bad, but it is a way to prepare it to be an angel.

That is why Jungkook blows the seashell, because he would announce the next catastrophes that are approaching, that is why RM prepared himself with his ‘disciples’ for the coming dark times.

Acceptance of the ‘shadow’
Do you remember that several of the works of BTS are inspired by the theoretical work of Carl Jung ?, the boys have experimented in their music talking about the archetypes of the personality of the human being.

In this case they would be the different ways in which beings present themselves in society , it is as if people were made of different layers and only showed some at certain times.

In his research, Jung develo that there were in the human psyche 1 2 personality archetypes that profile human behavior from different expressions and symbolisms, this means that the video of ‘ ON ‘ would be the introspection of each of the members and acceptance of his shadow.

The human being is dual, it has two sides and the shadow is the evil within the human being, it has a lot of power when it is repressed, people must live together, know and explore their shadow that are fears,

‘ ON ‘ would be a self-battle of the members of BTS with its shadow and in the end accepting it and loving it with all its nuances, with all its elements, that’s why when the MV ends it reads ‘ No More Dream ‘, but when accepting its person in mind the dream, that’s why the end of the video is ‘ Dream ‘.

Thus BTS would demonstrate that they have found their place in the world, despite the barriers and obstacles, they pursued their dream so much that if they thought there was no hope in this world they found that together they are the hope of many people.

The Third Season of After Life is Confirmed by a Development...