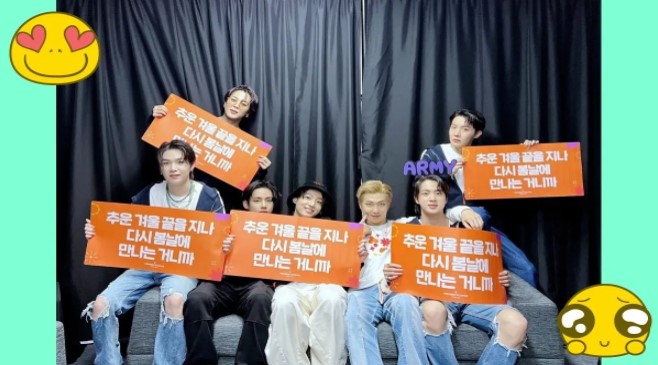 The last date for ‘Permission to Dance On Stage in Seoul arrived and as usual the members of BTS said goodbye to ARMY with a speech full of feeling.

As we have known, the K-Pop group, Bangtan Sonyeondan, presented three dates in the city of Seoul, South Korea.

The band had not presented a concert in two and a half years in their native country, fortunately the time came and this group returned to the stage in South Korea, leaving beautiful moments for ARMY and thus creating good memories. This time the idols gave a farewell speech for ARMY. You want to know more? Don’t stop reading.

The leader of Bagntan apologized for his yawning, the idol commented that he had not been able to sleep much. He mentioned that he was afraid that the K-Pop group would not show their full potential at this concert.

I knew how professional the members are, but Namjoon couldn’t help but think in a negative way, because they are a very good team, the members helped RM to stop thinking in a negative way and all his fears flew away and thank you to that, he is now aware that they can do anything.

The idol thanked the presence of ARMY, since, thanks to his support, the concerts were a success on these three dates.

He also commented that despite the obstacles, they did their best to get to see ARMY, he mentioned that she misses and loves them and asked them to attend a concert again.

The eldest of this group introduced himself and mentioned that ARMY means everything to BTS, so he made a headband with the ARMY sign.

He admitted that the idea was part of the staff and that he helped him make it. Jin confessed that he is an ARMY fan.

Jin commented that surely his fans were cold but he did not hesitate to mention how hard they had worked, so he wished them to return home well and ended with: I love you, ARMY!

Suga confessed that he had struggled to do concerts, during these two and a half years of absence. He admitted that doing many things was not easy at all.

He promised that at a future date BTS and ARMY will dance and sing together. He thanked the presence and that they have enjoyed the show.

J-Hope started his speech by mentioning that the third concert is over. He admitted that he didn’t identify his feelings, but as he warmed up, he asked himself about the speech that night and commented that he feels relieved.

He regretted not being able to see ARMY during these two and a half years, because of the pandemic, so the idol thought a lot about when would be the next time he would see ARMY.

He mentioned that he had been deeply sad, but after the concert he feels better.

He commented that this concert was significant and he doesn’t want to forget anything about it. He thanked the presence of his fans and ended with an I love you.

Jimin asked if AMRY had fun tonight. The idol lamented the restrictions that exist in the concerts, since he wanted to dance, sing and talk with ARMY and because that cannot be done, Jimin thought that they have not been happy concerts.

He admitted that the members of BTS felt sad after the first concert, because their audience could only sit down and they didn’t want to do concerts with those restrictions.

Fortunately, BTS felt the energy of ARMY and that made the status of each of the boys improve. He thanked his fans for waiting and that the members will come back better and with good music.

V admitted that he thought about his speech tonight. He commented that he had a lot of ideas but couldn’t organize them in his head and asked ARMY to confirm with applause if he knew what the idol was talking about.

So the idol opened a book and decided that he would say something about it, but while thinking about it he fell asleep, V ended up sharing the title and said: Love like never before! He mentioned that he loves ARMY.

The ‘Golden maknae’ asked ARMY how he had been during these two and a half years and admitted that they had suffered from not being able to see his fans.

After two and a half years, they managed to see their audience, even though they couldn’t shout they have been smiling. He mentioned that ARMY keep smiling, despite the difficulties and that they remain friends and family. He thanked the presence of ARMY and ended with: I love you!

These were the parting words of the boys of BTS. What do you think?

Read more: BTS gives its second concert in Korea and dedicates these words to ARMY

Without a doubt, these have been difficult times for everyone. Fortunately, things have turned out well, in a different way, but in the best way for BTS and ARMY. We would like to continue knowing more about these guys and thus continue to see how they shine, they have worked very hard and deserve all the recognition. So the day will come when these guys and their fans gather their voices in one place.

Among other news. This was Jungkook’s reaction when V gave him a ring. Keep reading!