Home Celebrity BTS “collaborated” with Olivia Rodrigo at the Grammys 2022 a few minutes... 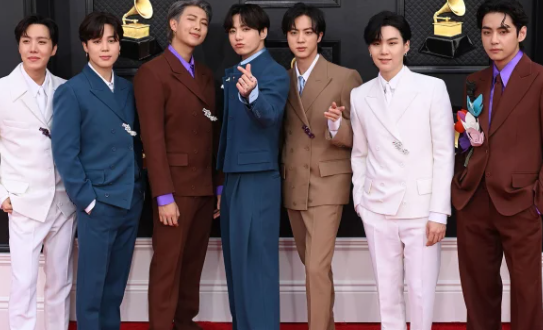 Sour butter! When BTS took the stage at the 64th Annual Grammy Awards on Sunday, April 3, fans got a surprise: a cameo appearance by Olivia Rodrigo.

The K-pop group began their performance of “Butter” with several participants sitting at different tables in the audience, and one of them — Vi — turned out to be next to the 19-year-old singer “Driver’s License”. The South Korean pop star, 26, whispered something in Rodrigo’s ear, making fans wonder what he could have said.

“OH MY GOD, BTS AND OLIVIA RODRIGO, THE DUO I DIDN’T KNOW I NEEDED,” one social media user wrote on Sunday. “I thought V was going to kiss Olivia Rodrigo,” added another fan who couldn’t help but notice how close the duo were sitting. “V just whispered in Olivia Rodrigo’s ear… are you kidding?????” — tweeted one of the viewers, reflecting the opinion of many BTS fans who watched the show.

Earlier in the evening, BTS spoke to E! News about which musicians they would like to collaborate with in the future, and V mentioned Rodrigo’s name. As one fan noted on Twitter: “When someone asked BTS who they wanted to collaborate with, V replied, ‘Olivia [Rodrigo],’ and now this.” (The other band members are Lady Gaga, Jay Balvin and Snoop Dogg.)

BTS’ performance was potentially in jeopardy earlier this week after Jungkook tested positive for COVID-19. “Upon arrival in Las Vegas, he felt a slight discomfort in his throat and immediately passed an express PCR test and a standard PCT test,” the Big Hit Music group’s record company said in a statement on Monday, March 28. being quarantined as a preemptive measure, the results of both tests were positive, and on Monday, Jungkook was confirmed with COVID-19.”

At the time, Big Hit stated that Jungkook’s participation in the planned performance would be “determined by local legislation on COVID-19, while we are actively discussing this with the organizer of the award.” However, a few days later, the label announced that the 24-year-old band member had fully recovered.

“We would like to inform you that BTS member, Jungkook, was released from quarantine on the 2nd (Saturday) local time in the United States after being diagnosed with COVID-19,” Big Hit said in a statement on Saturday, April 2. During quarantine, he had a slight sore throat, but he recovered.”

Jeongguk’s bandmate Jin also had health problems shortly before the Grammy Awards. Last month, the 29-year-old singer of “Epiphany” underwent surgery on one of his fingers after tendon damage. He performed during the award ceremony on Sunday, but his left arm was in a cast. The band’s set included a playful allusion to his injury: Jin spent the first part of the performance in a room similar to a control booth.

Aespa and its most popular songs that conquered the world