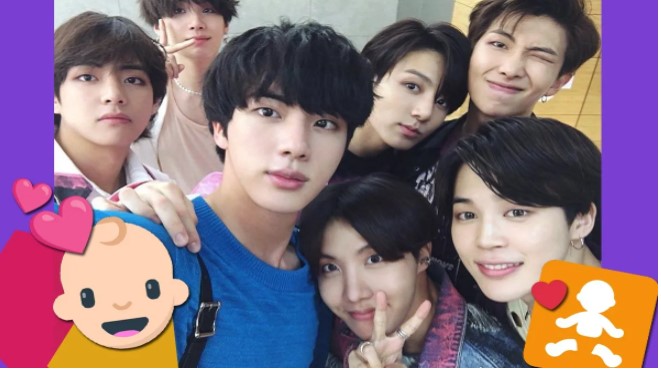 When it comes to making ARMYs smile, the boys of BTS are experts at pulling it off. The sweet personality of the members of this K-Pop band shows an irresistible side when they are with babies.

If you’re a fan of these guys, you’ve probably already realized that the members of BTS earn compliments from everyone who gets to know them, from fans to staff members who work alongside them, other celebrities, and more music artists.

The members of the group are known for their kind and hard-working personalities, but although on stage they look amazing and imposing, outside of performances it is the pleasant way of being of the singers that captivates everyone.

However, they too can be won over by the people they meet and first on the list of those capable of making idols smile are undoubtedly babies.

BTS WITH BABIES IS THE MOST ADORABLE COMBINATION FOR ARMY

On many occasions we have seen idols interacting with young children, sometimes they are children of their staff or guests at their shows, but at all times the members of BTS show how adorable babies seem to them.

But if you still have doubts about it, as proof we have that moment in which a little baby greeted the members of the K-Pop group shaking her hand with great encouragement, while a sweet smile appeared on her face.

The small action of this baby caused a great impression on the idols, who did not hesitate to respond to her gesture by imitating her greeting and even standing up. The cries of emotion were also present and we cannot forget Jungkook touching his heart in reaction to the dose of sweetness that he had just witnessed. AWW!

BTS MELTS ARMY’S HEART WHEN THEY’RE NEAR A BABY

While these HYBE singers can’t resist the cuteness of the little kids that appear in front of them, their adorable reactions have a similar effect on their fandom, as it’s impossible for ARMYs not to smile at these interactions.

Also, the combination of adorable gestures between idols and babies is definitely a good way to start the day, don’t you think?

On the other hand, we recently told you what was the first song with which BTS entered the Billboard Hot 100 chart.